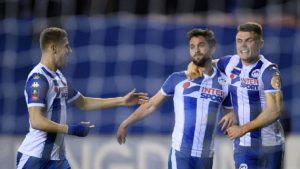 1. Citya��s run ended by Wigan
Manchester Citya��s hopes of winning the quadruple have incredibly been ended by League One side Wigan Athletic, as Will Grigg stunned the visitors with a brilliant 79th-minute low drive that beat the outstretched hand of Claudio Bravo.

City had lost just once against English opposition all season: the 4-3 defeat at title rivals Liverpool. But no-one gave Wigan, second in League One and more focused on securing promotion back to the Championship, much of a chance. However, they had a real opportunity for a shock when City were reduced to 10 men as Fabian Delph was controversially sent off for a high challenge on Max Power.

If anything, the dismissal just before half-time inspired City to cause Wigan even greater problems following a decent first half in which they should have been ahead. Wigan were forced deep into their own half as they soaked up attack after attack but managed to summon up one attack and how they made it pay. Kyle Walker misjudged a pass that gave Grigg an opening and despite the pressure from A?100 million centre-half pairing of John Stones and Aymeric Laporte, the Wigan forward kept his cool to fire into the bottom corner.

The 79th-minute goal stunned City, who were unable to create a killer chance to rescue their hopes of winning every competition this season. Guardiola even threw on Kevin De Bruyne for the closing stages but brilliant Wigan held firm to cause one of the greatest FA Cup upsets of recent years.

2. Man City see red, loose their cool
Guardiola has been calling for referees to clamp down on bad tackling in recent months and the irony wona��t be lost on many that it was one of his players whoa��d see a straight red card for a bad challenge.

Delph was sent off for what appeared to be a studs-up challenge on Power just on the cusp of half-time and it led to an angry exchange between the City coach and Wigan boss Paul Cook.

It seemed to be just the type of tackle that Guardiola has been unhappy with after half-a-dozen similar challenges on his own players that have not received the same punishment, much to his annoyance. However, he may have been confused why referee Anthony Taylor took out a yellow card for the incident, jotting down a name on his card, only to hold a red card high above his head seconds later. Guardiola looked utterly baffled by the decision.

Martin Rickett/PA Images via Getty Images
It seems silly to suggest but the sight of Guardiola could have made the referee change his mind, as it may have reminded Taylor of a recent directive from UEFA to punish such challenges with a sending-off. Aguero looked unhappy with the Wigan bench and remonstrated with Cook and his backroom staff, with those from each side still arguing and pushing when the half-time whistle blew, which prompted both sides to disappear into the tunnel and continue their verbal spat.

Delph felt hard-done by the decision and his punishment will feel even more severe when hea��s forced to sit out the Carabao Cup final against Arsenal this Sunday.

3. Lower league causes City problems again
Ita��s curious that in such an incredible season so far, City have so often struggled against teams from the lower divisions in domestic cup competitions.

While Chelsea and Manchester United have been comprehensively beaten away and Liverpool and Tottenham Hotspur thrashed at home, the league leaders have struggled to put away a�?smaller teams.a�? Championship side Wolverhampton Wanderers took them to penalties while Bristol City scored three times over two legs and now League One Wigan has completed a famous win.

The build-up to Mondaya��s match was dominated by talk of Wigana��s famous cup final victory over their illustrious neighbours five years ago, and that it would be an upset of even greater proportions if they were to be the side to stop Citya��s quadruple hopes.

a�?Wea��re asking the FA for special dispensation to play 14 players,a�? joked Wigan boss Paul Cook before the game, despite beating Premier League sides West Ham United and Bournemouth on route to the fifth round. In the end, Wigan certainly didna��t look like they needed the extra men as they worked doggedly to close the space in an attempt to restrict Citya��s passing game.

It became a fairer fight when Delph was sent off but the hosts had to scrap and battle even harder against 10 men, throwing their bodies in front of shots to try to secure a replay. In the end, Grigga��s goal ensured they wona��t have to do this again.

Lees sprinter back Guarding his Honour