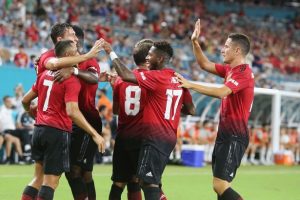 You have to admire the gall of  Jose Mourinho.  On Saturday he said ‘I don’t think  Eric Bailly  is a leader’ and in Miami there was Bailly, leading out  Manchester United  against Real Madrid.

Mourinho has already rebuked new absent captain Antonio Valencia for enjoying ‘too much holiday’ and the sight of the armband strapped to Bailly’s bicep was a welcome one. He missed the open training session at Barry University on Monday morning and Bailly was the only available senior centre half against Real Madrid, unless you count  Axel Tuanzebe.

Tuanzebe did not even start as Mourinho ushered Scott McTominay into the United back three. Nothing to see here, he is the manager’s player of the year, after all. Only United are trying to sign a centre-back, be it Toby Alderweireld or Harry Maguire, who is adept in a back three and this felt like another coded message from Mourinho to Ed Woodward, present in Florida for the final tour leg.

Mourinho is said to be prepared to use Nemanja Matic as an auxiliary centre half, only he had abdominal surgery last week. United’s back three experiment was abandoned early last year and Mourinho is giving the impression he is keen to revert to it provided he has the quality rather than the quality. Over to Woodward.

There was more quality up front, though. Alexis Sanchez tidily finished from Matteo Darmian’s perfect pull-back on 19 minutes as his dominance of United’s tour continued. Sanchez’s intensity has stood out in the United States and he has regularly railed against any modicum of mediocrity from teammates. The Chilean’s lay-off for Ander Herrera’s strike was maybe more impressive than his own effort.

This was an anomalous and victorious end to what has been a tumultuous tour for United. Their clinical attacking football has encouraged against Real Madrid and AC Milan and Sanchez and Juan Mata have developed a telepathy which could offset the loss of the wantaway Anthony Martial, as well as World Cup participants Romelu Lukaku and Marcus Rashford. The latter was in attendance with Jesse Lingard as they effectively made themselves available for the Leicester league opener on August 10.

Despite the incongruous inclusion of McTominay in a dicey defensive trident, the United XI against Real could feasibly line up against the Foxes a week on Friday. The competitive edge was reinforced by Mourinho, who on more than one occasion overstepped the touchline to dispute contentious decisions.

Mourinho’s XI was tempered by Karim Benzema’s strike just before the pause as Real exploited United’s slow defensive adaptation on the flanks and the confusion in the middle. Bailly might have challenged Benzema more aggressively had he not suffered an injury moments earlier but he was piqued by McTominay’s apparent ball-watching and conducted an inquisition as they approached the tunnel.

It could have been mistaken for a Cristiano Ronaldo memorial match en route to the Miami Dolphins’ home. His name was on United shirts, Real Madrid replicas and a Juventus family trio bore it at the Hard Rock Stadium. The indelible mark he left on Madrid might be keenly felt in a year’s time unless new coach Julen Lopetegui is able to reinforce his attack which featured livewire signing Vinicius Junior. From BBC to BBV.

This was an evening for Gareth Bale to lay down a marker. He was identified as Ronaldo’s heir apparent at Tottenham but had had to wait five years to step out of his former teammate’s shadow. Ronaldo used to emerge from the tunnel last at Madrid and in Miami it was Bale who was at the back of the queue.

Mourinho made a beeline for Bale in the Levi’s Stadium tunnel last year and did so again, clasping hands and giving the Welshman an affectionate pat on the cheek prior to kick-off. That is as much face-time he is going to get with the 29-year-old after Lopetegui doused speculation over Bale’s future at the pre-match press conference. Bale lasted 45 minutes against United.

Jesus Vallejo and Javier Sanchez were no Sergio Ramos and Raphael Varane as Sanchez schooled the central defensive stand-ins and Benzema did likewise up the other end. Real were camped in the United half for the second 45 as Tuanzebe warmed up but Bailly played on.

Rumor: LeBron James will leave Cavaliers due to split with Dan Gilbert on Donald Trump