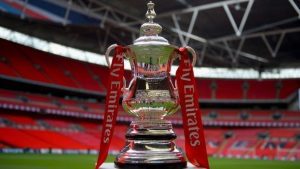 Manchester United were drawn at home to Brighton in an FA Cup quarterfinal draw which saw all the big guns avoid each other on Saturday evening.

Jose Mourinhoa��s men learned they would face the Seagulls shortly after sealing their place in the last eight with a 2-0 fifth-round win at Huddersfield .

Wigan or Manchester City, who meet on Monday night, will host Southampton, while Chelsea visit Leicester and the winners of Sundaya��s Rochdale-Tottenham tie will travel to Sheffield Wednesday or Swansea.

Chelsea and Leicester advanced on Friday night, with respective 4-0 and 1-0 victories over Hull and Sheffield United.

Sheffield Wednesday and Swansea face a replay after their fifth-round clash at Hillsborough ended goalless on Saturday.

Ties to be played March 16-19:
Sheffield Wednesday or Swansea vs. Rochdale or Tottenham

Manchester United vs. Brighton
Leicester vs. Chelsea
Wigan or Manchester City vs. Southampton

7 thoughts on “Man United to battle Brighton, while Leicester will be home against Chelsea in FA Cup quarterfinals”