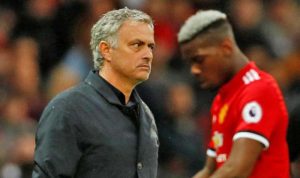 On Sunday, Man City won the Premier League for the third time after  Manchester United  were beaten 1-0 by West Brom.

And after the match, Mourinho was scathing in his assessment of the United players.

He said: a�?I trust in my work. I have no reason not to a�� eight titles and three Premier Leagues and the last Premier League was not 20 years ago. It was three years ago and I know how to win. I believe in myself but I don’t play.

a�?Probably because I won eight championships, I was not in the moon with the victory against them [City]. It was only three points.

a�?That didn’t make me feel super happy and, in my opinion, it affected some of the people that were too happy.

a�?I have lots of experience because I won eight titles and I was not over the moon a�� but I saw lots of people who were on the moon. During the week I was trying to fight that.

a�?With my experience you don’t titles with inconsistency. You win, of course, with quality, but with consistency in every level, not just the performance level but also the mental level. One of the things we have to improve is consistency.

And according to the  Independent , the only players Mourinho wants at the club are David De Gea, Ashley Young, Nemanja Matic, Jesse Lingard, Juan Mata, Alexis Sanchez and Romelu Lukaku.

It is claimed those seven players are the only ones who Mourinho trusts. It means the likes of Paul Pogba, Anthony Martial and Marcus Rashford could face questions about their future.

The report says Mourinho’s feelings towards his players are part of regular mood swings he has.

Mourinho has already made clear significant investment is needed on the United squad in the summer as they sit 16 points behind City in the league and crashed out the Champions League to Sevilla in the last-eight.

United still have a chance of silverware with the FA Cup and face Tottenham in the semi-finals on Saturday.