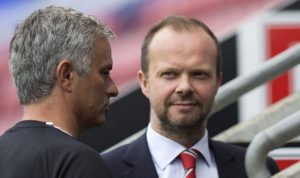 And according to The Independent, he is not happy that Woodward is not giving him more backing in the transfer market.

It is claimed this is one of the reasons why Mourinho is cutting such a low-key figure on their pre-season tour to America.

That, coupled with the fact many of his key players are not in the US after being handed post-World Cup holidays, is riling the Special One.

The Independent say Mourinho began the summer looking for more dynamic options at full-back. Antonio Valencia and Ashley Young will both be 33 when the new season starts and Mourinho feels the club veterans could be upgraded.

But instead of getting a high profile new addition in that position, Mourinho was given 19-year-old Dalot and was told by Woodward that would be it.

In meetings over the summer, executive vice-chairman Woodward did offer to pursue a big name with Kylian Mbappe, Neymar and Gareth Bale among those mentioned.

These, however, were turned down by Mourinho because he wanted hard-working wingers instead.

Mourinho this week admitted he wants to sign two more players before the close of the transfer window on August 9.

Asked directly how many new signings he would like, Mourinho said: “I would get two more players.”

Mourinho now has just 11 days to get his business done.

14 thoughts on “Man Utd transfer news: Jose Mourinho has major problem with Ed Woodward – this is why”