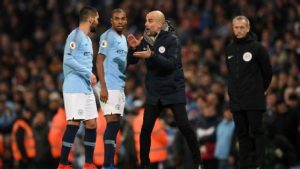 Big moments change big matches and big matches define a season, so if Manchester City are able to overhaul Liverpool’s four-point lead and retain the Premier League title, it may all stem back to John Stones’ remarkable goal-line clearance during the first half of Thursday’s table-topping clash at the Etihad.

It was a huge moment in City’s 2-1 victory. Without it, Liverpool could now be heading over the horizon toward their first championship since 1990, but they have now been dragged back into a title race by Pep Guardiola’s men.

Stones almost made a mess of the clearance, initially striking the ball against goalkeeper Ederson before racing back to the goal line to hack the ball to safety

Check out the  goal-line technology image of the ball  being just 11 millimetres from crossing the line for the score that would have put Liverpool ahead. It was unbelievably close, as Stones admitted after the game.

“I’m just happy it didn’t go over the line!” Stones said. “Those sort of things can change a game.”

It truly was game-changing and it could be the moment that turns the tide in City’s favour in the title race. Had the ball gone into the net and provided the platform for a Liverpool victory, Jurgen Klopp’s team would now be sitting 10 points clear of City at the top and six ahead of Tottenham.

Klopp and his players would say all the right things, of course, about the title race not being over and plenty of points still to play for, but that would have been fooling no one.

Even a draw, which would have left Liverpool seven points clear, would have been something of a footballing Everest for City and Tottenham to climb to finish on top.

But City’s victory, which has cut the deficit to four points, means we now have a real title race between now and the end of the season.

City are not the force they were last season, by any means, and the style of last season’s title success was replaced by a more direct, uncompromising approach against Liverpool.

But perhaps that pragmatism stems from Guardiola and City knowing that substance over style is sometimes the way to win — win ugly, even — when it matters in a title race.

Crucially, they have title-winning experience and they are within reach of Liverpool, whose nerve will be tested between now and May.

But Klopp, a realist who often bristles when asked about hypotheticals, insisted that he and his players must still be happy with their current status, top after 21 games, following this defeat against the champions.

“I have so much faith in my players,” Klopp said. “If somebody had told me that, after both games against City, we would be four points clear, I would have paid money for it because I would have thought it is not possible.

“Look, we haven’t won five titles in the last 10 years, so we don’t have that experience and we have to win as many games as we can to finish the season well.

“But tomorrow morning, we wake up and have the opportunity to prepare for the next game. Football is like this.”

Losing is never a good thing, so the focus now will be on how Liverpool react.

They will either bounce back and kick on toward the title or they will suffer a wobble, maybe even a crisis of confidence, that will open the door for City and maybe even Spurs to catch them.

This is an impressive Liverpool team, make no mistake, and they are stronger in all departments than the team that went so close to winning the title under Brendan Rodgers in 2014.

But even the best teams can suffer when the nerves set in and the scars of failure five years ago may yet reopen this time around.

For that to happen, though, City must lead the charge and ensure that they breathe so heavily down Liverpool’s neck that they force the mistakes that lead to dropped points.

Kevin De Bruyne is fit again — the Belgian was among the substitutes for this game — and the Belgian’s importance to City cannot be overstated.

With De Bruyne back and in form, City can pose a formidable threat to Liverpool and they are capable of causing sleepless nights for Klopp and his players.

For Guardiola, though, winning this game and ending Liverpool’s unbeaten run was a crucial step toward reining the leaders in.

“They [Liverpool] are leaders — it is four points but we have reduced the gap,” Guardiola said. “We knew that if we won we would be in contention to fight for the Premier league; if we lose it is over.

“I don’t remember a league so tough — there are so many huge contenders fighting for the title. It is closer; every game is a final.

“We have to fight a lot, but this win gives us a lot of confidence.”

Whether City’s confidence becomes Liverpool’s anxiety, only time will tell. But four points can be closed quickly and Liverpool know they will have to fight all the way if they are to win the title.