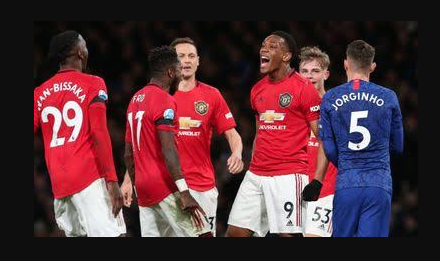 Manchester United defeated Chelsea 2-0 at Stamford Bridge courtesy of goals from Anthony Martial and Harry Maguire to move within three points off the fourth place position.

The hosts were without Tammy Abraham and Calum Hudson Odoi, so there were places for Michy Batshuayi and Pedro to join Wilian in the Chelsea attack.

Ngolo Kante limped off early in the match, he was replaced by Mason Mount.

Chelsea had a flurry of chances in the first half with Batshuayi guilty of spurning those chances.

Manchester United took the lead just before halftime when Martial’s header sailed into the net following a superb cross from Wan-Bissaka.

Chelsea came out fighting in the second half in a bid to get a goal but their efforts were frustrated by VAR which ruled out a goal by Kurt Zouma for a push by Azpilicueta, another goal was chalked off when the technology ruled out a beautiful header by Olivier Giroud for offside.

Manchester United defenders were dogged and rugged snuffing out every chances, Chelsea had only one short on target in the match despite dominating possession.

Harry Maguire added the second goal in the 66th minutes with another powerful header to hand Manchester United the maximum points.

Chelsea lead Tottenham by a point in the fourth position, they will host Spurs on Saturday.

This is the first time Manchester United have completed a league double over Chelsea without conceding a goal since 1964-65.

Odion Ighalo became the 200th player to make an appearance for Man Utd in the Premier League, and the first Nigerian to do so.

Chukwueze scores as Villarreal routs Real Betis, moves near the top in Spain