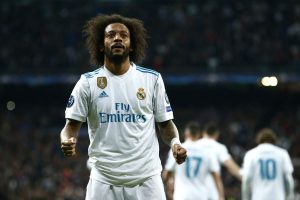 After helping Real Madrid to the Champions League final, Marcelo has conceded that he was perhaps fortunate to get away with a handball shout during a clash with Bayern Munich.

The German giants felt that they should have been awarded a spot-kick during the closing stages of the first half at Santiago Bernabeu.

With the contest locked at 1-1 on the night,  Bayern were pushing hard for a crucial second away goal .

As Joshua Kimmich attempted to fire over a cross, Marcelo closed him down and appeared to touch the ball with his hand while trying to block the delivery.

Bayern’s appeals fell on deaf ears, with the match officials waving away their protests, and Marcelo says it was up to the referee to determine whether his actions had been deliberate.

He spoke to  Fox Sports  after  helping Real to a 2-2 draw and a 4-2 aggregate success  and said when asked if the ball had struck his hand: a�?Yes, it hit my hand.a�?

When quizzed on whether a penalty should have been awarded, the Brazil international added: a�?Well, if it hit my hand, Ia��d say so.

a�?But you guys know that I dona��t talk about the referees. Many times, refs have ruled against us, and now, I cana��t come here and talk about his performance again, because when they rule against us I don’t talk about it, you know. I imagined youa��d ask me thata��

a�?It is what it is. It was difficult for the ref, because there were many players blocking his view, but if I came here to tell you that the ball didna��t touch my hand, Ia��d be lying to you.a�?

The incident has now gone and Bayern are reflecting on another frustrating European exit at the hands of Real a�� having fallen to the same opponents at the quarter-final stage last season.

The Blancos, meanwhile, remain on course for a hat-trick of Champions League triumphs.

Zinedine Zidane’s side continue to rewrite the history books, with the club  preparing for a third successive final and a 16th in total a�� with their manager yet to suffer a defeat in continental knockout competition .

Serena Williams sees off Sevastova to waltz into US Open final