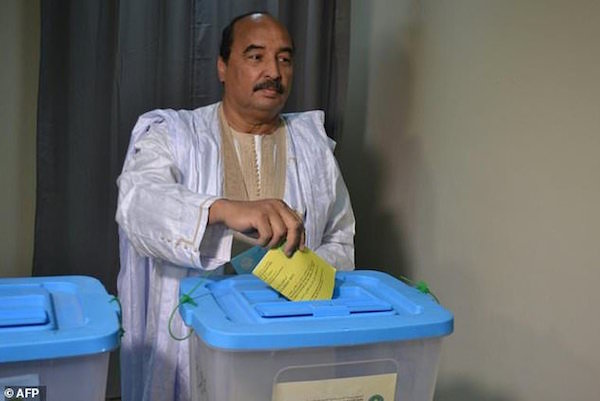 Nouakchott – Mauritanians have voted to abolish their Senate and alter their national flag by referendum, the electoral commission announced Sunday, in a clear victory for President Mohamed Ould Abdel Aziz the day after the vote.

While turnout was 53.73 percent, 85 percent of voters on Saturday declared “Yes” to changes put to a referendum when they were defeated in the Senate in March, despite fierce criticism from a boycott movement that called mass protests during campaigning.

Members of opposition parties spearheading the boycotters held a press conference on Sunday during which they denounced an “electoral farce which has given way to open-air fraud,” adding that people “had clearly rejected the constitutional amendments.”

They said they would not recognise the results of the referendum, having previously claimed the government would rig the vote.

The most contentious issue surrounding the vote, given that just one opposition party campaigned for “No” while the boycott campaign attracted several parties and civil society movements, was the turnout.

Turnout was just 36 percent in the capital, Nouakchott, but was much higher in the remote west African nation’s rural areas, at times hitting 80 percent, the electoral commission said.

The boycott movement held several protests attracting thousands of supporters, but were also prevented from demonstrating by the security forces, who on Thursday shut down several planned rallies close to the capital with tear gas and beat protesters back with batons.

The UN Human Rights Office said Thursday that “protest leaders were reportedly beaten up and a number of them were arrested” during campaign rallies in the last few weeks, urging the government to ensure fair and credible elections.

Around 1.4 million Mauritanians were eligible to vote, and celebrations were expected from the select opposition parties that did support the revision.

The opposition groups opposed to the measure say they are concerned that, despite Aziz’s claims to the contrary, he is laying the groundwork for a third term in power — with his own prime minister saying back in July that he supported the idea.

Aziz himself fuelled speculation on Saturday by saying that “in two years, or even 10 years other amendments could arise to adapt our constitution to reality,” without elaborating.

The proposal to modify the constitution, in force since 1991, was rejected by the Senate in March, leading Aziz to call the referendum to push through the changes.

Around 20 Senators, who have held a sit-in for three days at their chamber, suspended their protest and said they would gather Monday to consider the “fraud” committed by Aziz and his supporters, according to a statement.

The Mauritanian flag will now feature red bands added to the current green flag with yellow Islamic crescent and star, to honour the blood spilt by those who fought for freedom from colonial master France.

392 thoughts on “Mauritania votes to abolish Senate by referendum”