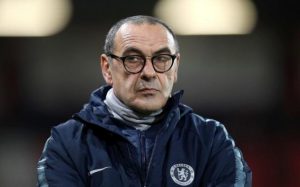 Maurizio Sarri has defended his style of football by describing himself as a dreamer and insisting he will continue to dream even if it costs him his Chelsea job.

Head coach Sarri could face the threat of the sack if Chelsea suffer a shock defeat to Huddersfield Town on Saturday, three days after their  thrashing at Bournemouth.

Sarri’s approach is under scrutiny, amid fears within his team that opponents have worked them out and that there is an over-reliance on midfielder Jorginho.

There have been calls for the Italian to abandon his ‘Sarriball’ approach and revert to a Plan B to get Chelsea’s Premier League season back on track with their top-four hopes in the balance.

He also now has the challenge of trying to keep his entire squad happy, despite the fact the frustrated quartet of Gary Cahill, Davide Zappacosta, Callum Hudson-Odoi and Danny Drinkwater did not leave in January.

But Sarri has reiterated that he will not be pressured into changing his management and the way he wants Chelsea to play, despite recognising it could end in his dismissal.

Owner Roman Abramovich has given his managers time during bad runs in recent years, but his patience will be tested if Chelsea fall to another humiliating defeat to bottom-of-the-table Huddersfield Town at Stamford Bridge.

Sarri could be without central defender Antonio Rudiger, who he rated at “50-50” because of a knee complaint, but he will be expected to cope.

But when it was put to the 60-year-old that Chelsea may not be a good environment for a dreamer, he replied: “It’s not my problem. I want to remain the same man. If I am a dreamer, I am a dreamer. If I have fun with my football, I want to play my football. If I believe that the organisation in a team is everything, I cannot change my mind.”

Using Barcelona as an example, Sarri repeated his belief that he does not need a Plan B to be successful even if it makes Chelsea predictable.

“Everybody, 10 years ago, knew very well Barcelona and Barcelona won everything because they played their football very well. So, first of all, I want to play very well my football. Then I can change. Barca were predictable, but they won.”

Sarri seems untroubled that a stubbornness to change his approach could ultimately cost him his job and insisted that he can cope with the pressure at Stamford Bridge.

“I arrived from Naples. Naples is, for the third time in a row, in the Champions League. So the level here is really very high, but the old level wasn’t so low.

“And I think the pressure at Napoli was more. Because Naples is the only big city in Italy with only one team. So, in Naples, the pressure from the fans is really a big pressure.”

Those who believe that summer signing Jorginho, who Sarri brought with him from Napoli, is becoming a teacher’s pet will be concerned by the latest defence of the midfielder.

On whether or not he would consider swapping N’Golo Kante into Jorginho’s position, Sarri added: “Only for 20 minutes if I have to defend a result.”

Telegraph Football revealed on Thursday night that Eden Hazard was one of the players singled out for criticism  from Sarri, when he locked the players in the dressing-room for almost an hour at Bournemouth’s Vitality Stadium.

And Sarri underlined the fact that he believes Hazard must change his game if his style of play is going to work.

“I think that he’s changing,” said Sarri. “He was used to playing as an individual player. Now he has to play in a particular way. It’s not easy for him because he became Hazard playing in another way, so I think very well it’s not easy.

“He needs to improve, of course. That’s normal. He’s fantastic from the technical point of view and I think he can do more tactically. At the moment, it’s not easy for our striker to play in this team.

“As you know very well, we have a lot of individual players like Hazard, Willian and Pedro, so it’s not easy for the striker to do the right movement at the right time.”

Sarri started his Chelsea reign with a record 12-game unbeaten run in the league, but, asked if the task ahead of him is more difficult than he thought, he said: “Probably yes, but I knew very well that it would be very difficult.

9 thoughts on “Maurizio Sarri: I am a dreamer and just want to play my football”