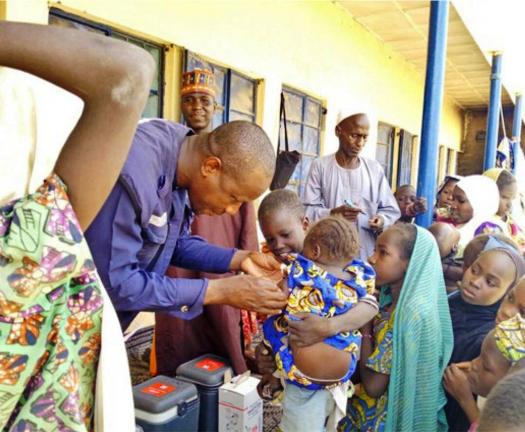 World Health Organization (WHO) says it is providing technical and financial support to the Borno state health authorities to implement a selective measles vaccination campaign.

This was contained in a statement issued by the Communication Manager, WHO, Charity Warigon on Monday in Abuja.

Warigona said that the support was in a bid to interrupt measles transmission in parts of Borno state as well as boost vulnerable population’s immunity in newly accessible areas.

The four day exercise targeted more than 200, 000 children of between six months to15 years. The LGAs were Magumeri, Nganzai and Damboa where suspected outbreaks of measles was reported in April 2018.

According to the statement, other LGAs include Bama, Dikwa, Gwoza, Kukawa, Kala Balge and Ngala where large numbers of children who have not been vaccinated since 2014 were resettling.

WHO already trained and deployed 219 vaccination teams to deliver potent measles vaccine to all eligible children in these areas.

She said that the redeployment was in view to control transmission and strengthening resistance to the spread of the disease among the population of unvaccinated newly liberated children.

Earlier in April 2018, suspected measles outbreaks was reported in Magumeri, Nganzai and Damboa LGAs of Borno state involving more than 350 children with 61 deaths.

“The current enhanced vaccination campaign against measles in Borno is most appropriate in view of the fact that outbreaks have been reported in some LGAs,”

“This is even more commendable as children who have not been reached with vaccinations against measles since 2014 were resettling in most of these LGAs including Bama, Dikwa, Gwoza, Kukawa, Kala Balge and Ngala.”

The humanitarian crisis caused by conflict in Borno state has left 3.2 million people in need of various assistance including more than 1.3 million internally displaced persons (IDPs).

With more than two-thirds of health facilities destroyed or partially functional, the population, especially children, are vulnerable to infectious diseases like measles, malaria, respiratory infections and diarrhoea.

The combination of malnutrition, malaria and measles increased child deaths up to 4 times higher than what is considered the emergency threshold (8 deaths per 10 000 children aged under 5 years per day).

Measles is a highly contagious disease and a leading cause of death in young children. In 2015, there were more than 134 000 measles deaths globally; most of them were children aged less than 5 years.

EXCLUSIVE: Atiku Relying On Body Cameras From His Agents To Beat Buhari In Court

Another 159 Nigerian migrants return from Libya

8 thoughts on “Measles: WHO set to boosts immunity of over 200 000 children in Borno”