Melaye’s lawyer explains why he is in police custody

Melaye’s lawyer explains why he is in police custody 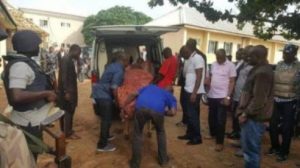 Mike Ozekhome, the lawyer representing embattled Kogi State senator, Dino Melaye, has opened up on the trial of his client earlier today.

Dino Melaye had on Thursday appeared before a Kogi court over alleged criminal conspiracy.

He was consequently remanded in Police custody till June 11.

Ozekhome, a Senior Advocate of Nigeria, SAN, while speaking with Premium Times, said the decision of the court was for the Inspector-General of Police to a�?take adequate care of the defendant.a�?

a�?What happened was that the prosecution asked the court to remand him in prison, but the judge refused and rather said the Inspector-General of Police should take care of Mr. Melaye until he fully recovers.a�?

a�?The police will have no alternative but to return Mr Melaye to the National Hospital Abuja, especially since hospitals in Kogi State are all on strikea�?.

As at time of filling report, it is not yet clear if the police will bring the senator back to Abuja or keep him in Lokoja, the Kogi State capital.