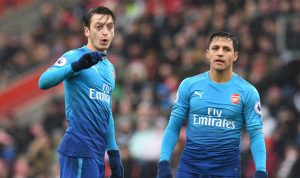 Arsenal star Mesut Ozil will become a Manchester United player but not until the end of the season, according to ESPN FC pundit and former West Ham goalkeeper Shaka Hislop.

But Hislop reckons a deal will happen, and believes United will get the 29-year-old for free in the summer.

“This has been going on for quite some time,” Hislop said of Manchester United’s Ozil interest.

“I think there is a chance (of it happening). I actually don’t think it happens in January. But I’ll put it down as a chance and say it happens.”

Barcelona have also been linked with a move for Ozil in recent weeks.

However, reports from Spain claim Ozil would prefer a move to Old Trafford over a return to La Liga with Barca.

How are the mighty fallen? Italy misses World Cup for the first time in 60 years