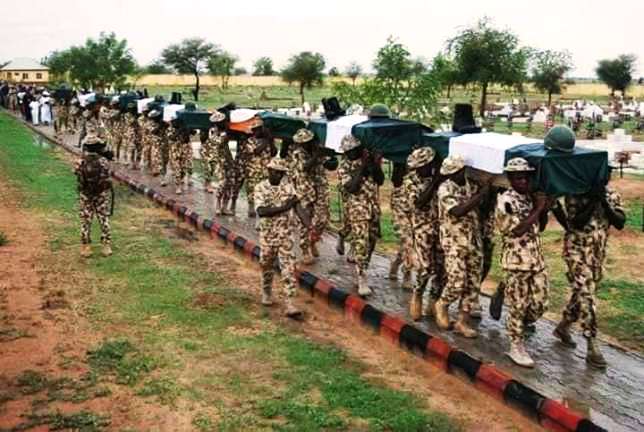 The Nigerian Arny has held special burial in honour of the gallant officers and soldiers that lost their lives during the 8th November 2018 Metele Military formation attack by the Boko haram insurgents .

The Chief of Army Staff, COAS, Lt. Gen. Tukur Yusuf Buratia in his address said out of the 23 officers and soldiers that died, 19 were buried today Friday whose next of kin were present while the remaining 4 soldiers will also be given befitting burial when their next of Kins are around .

Represented by the Chief of Training and Operations, Nigerian army headquarters, Major General Lamidi Adeosun, he said 31 other soldiers sustained various degrees of injuries during the attack and some have been treated and discharged while others are still responding to treatment at the military medical services center in Maiduguri .

He said, the gallant officers and soldiers paid the supreme price while serving their fatherland meritiously and gallantly , stressing that, the Nigerian Army will forever live to remember them and their sacrifices and will continue to do it's best to root out boko haram insurgents in the country.

He further said that Nigerian army will also continue to do it's best on the welfare of officers and soldiers as well as the families of the departed colleagues by way of supporting and encouraging all the officers and soldiers in the fight against insurgency and ensure that the military fight the war to a finish.

The COAS extended the condolence of the President and assured his support to the Nigerian army and provision of fighting equipment for the Nigerian army to continue to deal decisively with all the criminal elements and anybody or group that will be a threat to national security across the country.

General Buratai further pledged to continue to do his best while calling on Nigerians to join the Nigerian army in the fight and support the fight against the insurgency.

He prayed for the repose of their souls and condoled the families and relations of the fallen heros after they were laid to rest and burial procession which Colonel Musa Usman, the Chief Imam., 7 Division, Nigerian Army Maiduguri Jummaat mosque led the prayers and burial procession of the Muslim faithfuls while the Deputy Director, Chaplain Services (Prot), Major Ayuba Usman led that of the Christian faithfuls.

Earlier the Theater Cimmander, Operation Lafiya Dole, Major General Benson Akinroluyo described the attack as very unfortunate and sympathized with the families of the fallen heroes, pointing out that, the loss of their lives will not be in vain rather it will ginger the Nigerian army in the fight against the Boko Haram insurgents to an end.

General Akinroluyo lamented that it was unfortunate that the theater command lost gallant officers and soldiers and Boko haram terrorists have continued with their wanton destruction of property and killings of people threatening national security.

He added that the lives of the fallen heroes will be written in gold and the Nigerian army will foeever live to remember them and their sacrifices to their fatherland and gallantry..

Governor Kashim Shettima of Borno state said the government and people of Borno has been in support of the Nigerian military in the fight against the insurgency and will continue to do so while consoling the Nigerien army officers and soldiers over the passing away of their colleagues.

Represented by the Deputy Governor, Usman Mamman Durkwa, he prayed for the repose of the souls of the departed officers and soldier's as well as condoled their families and relations .

Highlights of the event were special prayers, presentation of flags to families of the departed souls, and photographs