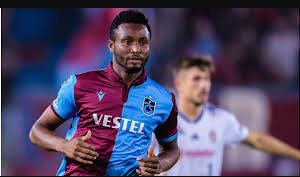 According to Yahoo Sports, the Brazilian side are in talks with the Nigerian midfielder who is currently a free agent after leaving Trabzonspor last month.

Mikel reportedly cut ties with the club after the Turkish Super Lig continued as normal despite the outbreak of the coronavirus (COVID-19) pandemic, which has claimed over 47 000 lives worldwide.

The 32-year-old made a name for himself at Chelsea for whom he played for over a decade before stints at Tianjin Teda in China and in the English Championship with Middlesbrough.

Mikel has won several trophies in a glittering career including the 2013 Africa Cup of Nations, two English Premier League titles and one UEFA Champions League crown with the Blues.

12 thoughts on “Mikel In Talks With Brazilian Club, Botafogo ”