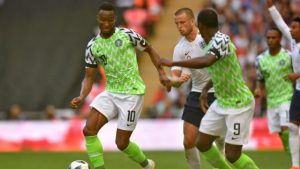 As Nigeria gear up for their opening game of the 2018 World Cup against Croatia on Saturday, captain John Mikel Obi has promised that the team will be switched on from the start – unlike in their warm-up games.

Two miserable first half performances against  England and Czech Republic  largely contributed to losses to both teams that stirring second half fightbacks failed to overcome.

But Mikel says the  Super Eagles  will not repeat the mistakes going forward: “I don’t think we want to start from the second half. We want to start well in the first half. From the word go, we want to be there, in every tackle, winning every ball, controlling the play like we always do.

“This is how we play. We don’t want to wait until the second half. This is something we have spoken about and I’m sure we can do better in the first half of games. We hope and we believe we can start well in this tournament.”

Croatia in Kaliningrad will be the first examination of that, and Mikel admits it will be a tough, tactical test.

“Croatia are a fantastic team with fantastic players, but we have good players too. It’s going to be a game of tactics. We have to play our game and make sure we control the game like we always do.

“It’s going to be tough, but we know how we play and how we want to play, so we are going to have to continue playing that way.”

Many pundits have ruled this  young Nigeria side  out, especially given that Argentina are also in the group, but Mikel says flying under the radar suits them just fine.

“When people say you can’t do something, you want to prove them wrong,” he said. “We have no pressure. We want to do exactly what we want to do. We put pressure on ourselves to do well because we want to do well.

“So we can use the same motivation like we did in the qualifiers. Every game counts. We want to start the game on Saturday in a positive way. If we get a good result, we can build on that and hopefully qualify from the group.”

Juventus to Chelsea: You can't have 'extraordinary' Sandro this transfer window