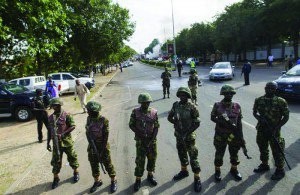 Armed groups have killed more than 100 soldiers and captured a huge stock of weapons in clashes in northeast Nigeria since Dec. 26, a report by a group of aid agencies said on Friday.

Attacks had intensified over the past few weeks and forced thousands of people to flee to safer areas in Nigeria and over the border to neighboring Chad, the report said.

The surge has occurred in the run-up to an election on Feb. 16 in which President Muhammadu Buhari is seeking a second term, turning security into a campaign issue. The attacks have mostly been carried out by an Islamic State-allied faction of militant group Boko Haram.

Nigerian defense ministry and military spokesmen did not immediately respond to requests by Reuters for comment.

The report by the Global Protection Cluster in Chad, a group of aid agencies led by the United Nations High Commissioner for Refugees, said,  “Raids against the Nigerian army have killed more than 100 Nigerian soldiers. According to the information available, the armed groups captured a huge stock of weapons.”

The report said attacks in the Baga-Kawa area of northeast Nigeria on Dec. 26 caused more than 6,357 people to flee into Chad and some 20,000 others to flee to safety within Nigeria.

Last month, Islamic State in West Africa (ISWA), which split from Boko Haram in 2016, seized the town of Baga, where a multi-national force fighting the militants is based. Troops later regained Baga.

Three things I did while in prison — Obasanjo

7 thoughts on “Militants have killed over 100 soldiers in Northeast Nigeria since late December: Aid agencies”