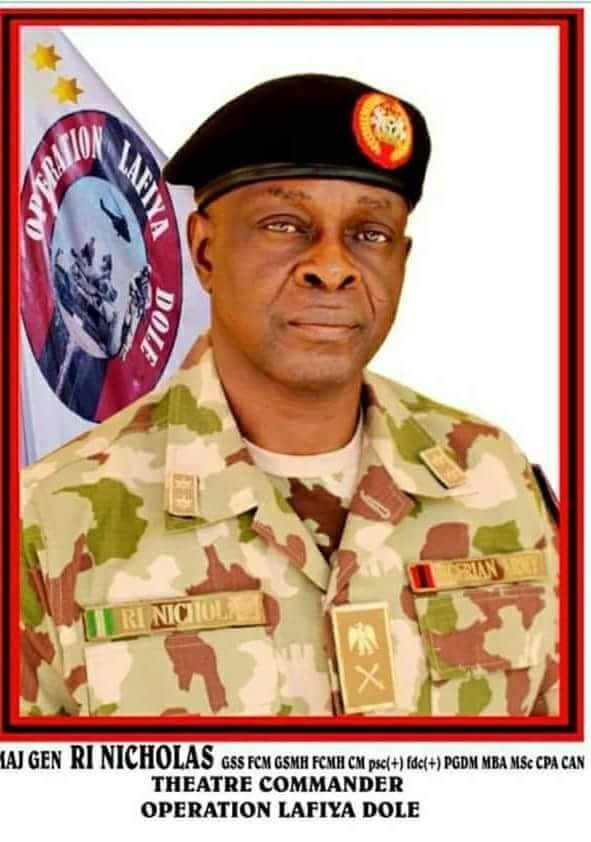 The Theater Commander, operation Lafiya Dole, Major General Rogers Nicholas at a monthly press briefing Wednesday said that NAF have in the period under review, under the Air Task Force also conducted Operation RUWAN WUTA III from 12 – 17 December 2017 to consolidate on the counter insurgency gains earlier recorded in Operations RUWAN WUTA I and II.

The Operation was a 6-day Air Interdiction (AI) to further sustain the tempo of offensive air operations, thereby denying the insurgents the much-needed respite to recover and re-organize themselves to carry out any major offensive against own troops.

He said during the Air operations, key adversarial targets were identified and attacked in a series of air strikes by the Air Task Force. Aside the initially identified targets, intensive Intelligence Surveillance and Reconnaissance (ISR) missions were conducted to acquire other targets for interdiction as the operation commenced.

While the ATF provided close air support to Land troops, as they conducted offensive and clearance operations against the insurgents in Arina-Chiki, Arina-Woje, Chukun-Gudu and Bukar-Meram.

” This obvious synergy with the Land troops culminated in the decimation of the insurgents as well as destruction of several BHT technical (Armed vehicles) and other logistics, thereby significantly degrading their capabilities.”

General Nicholas notes that in order to successfully execute these Operations, the Air Task Force conducted a total of 71 missions in 94 sorties, within a total of 152 hours 45 minutes and a total of 142,230 Litres of Jet A1 fuel was utilized by the various participating platforms.

The Air Task Force in conjunction with the Multinational Joint Task Force (MNJTF) has currently commenced the conduct of Operation RUWAN WUTA IV around the northern fringes of the Lake Chad Islands in support of ground operations against the insurgents,” he added..

The General also said that in the period under review, a number of BHT suspects were nabbed during surveillance operations by vigilant troops and the arrested suspects were apprehended for indulging in subversive and other atrocious activities.

Nicholas maintained that a total of 34 Boko Haram suspects were arrested during the period of these operations where troops in conjunction with vigilantes arrested Isah Muhammadu – 32 years from Chirokusko and Adamu Isah – 25 years from Garga village both in Tarmuwa Local Government Area of Yobe state.

While they were in possession of one Ak 47 rifle, 2 Dane guns and 106 rounds of 7.62mm (special). Time will not permit me to mention all the other cases here. The suspects who are currently undergoing interrogations will be thoroughly investigated and will subsequently be handed over for appropriate prosecution.

He said given the recent operational successes recorded in the Operations DEEP PUNCH II and the need to sustain troopsa�� domination of the area, it has become expedient to construct access roads into the very heart of the Sambisa forest.

The road construction being executed by Nigerian Army Engineers under Operation Lafiya Dole has commenced in earnest from Gwoza through Yamteke to Bitta, as well as from Bita through Tokumbere into Sambisa.

He also recalled that on 4 January 2018, Salomi Pogu, one of the Chibok girls abducted from Government Girls Secondary School, Chibok and held hostage by BHT since 2014 was rescued by troops as she escaped in the company of another young girl Jamila Adams and her child.

They were immediately given medical attention and later handed over to the Borno State Government for further processing and administering and during the second phase of Operation DEEP PUNCH II, another set of 84 abductees were rescued by troops from one of the BHT camps clamped down in Sambisa.

Among these rescued abductees, he said is the wife of Abu Yarsir, the personal physician to Abubakar Shekau while in the northern fringes of Borno state alone, over 700 abductees comprising fishermen and farmers were rescued in the ongoing operations in the Lake Chad Region.

The ongoing operations by troops of Operation Lafiya Dole, intensified by artillery and aerial bombardments of identified BHT enclaves through coordinated close support of the Air Task Force, has yielded positive results, aside decimating the ranks of the insurgents.

He said 25.a��Boko Haram Terrorists remained callous and continue to indulge themselves in the contemptible act of suicide bombing, forcefully using the most vulnerable in our society; innocent young women and children as IED couriers.

They have impenitently continued to target both civilian and military vehicles with IEDs, either planted on the road or conveyed in vehicles (VBIED). Other courier means such as motorcycle and bicycle have also been employed in these dastardly acts.

General Nicholas assured that the military are dauntless and will tirelessly keep seeking out and neutralizing BHT suicide bomb couriers, as well as destroying their IED factories.

He also expkained that several suicide bomb attacks were proactively averted by our troops before they reached their target destinations. BHT IEDs planted along roads targeting innocent road users were also detected and safely detonated by our Explosive Ordnance Disposal Teams (EOD). A mention of a few of these incidents will suffice in this briefing.

“On Tuesday 9 January 2018, troops deployed around Gamboru Ngala averted what would have been a very devastating suicide attack carried out by three female suicide bombers. Two of the suicide bombers strapped with suicide vests who attempted to infiltrate Gamboru town were taken out by troops.

“A third suicide bomber was also intercepted in the same general area and has been taken into custody with her suicide vest. In a similar situation, on 21 January 2018, two female suicide bombers hastily detonated their suicide vests near Dikwa Divisional Police station, when they were accosted by troops. Only the 2 suicide bombers died in the incident.

He called in the people to support and assist the troops end the fight by giving out useful intelligence about criminals or any suspicious element and movement in their midst.

” it is no gainsaying that in all of these operations conducted by troops of Operation LAFIYA DOLE, we have lost gallant comrades, who courageously paid the supreme sacrifice, rather than let a bunch of villains terrorise our nation.

“They fought for the just cause of defending the sovereignty and territorial integrity of our nation. At this juncture, I and the entire officers, soldiers, ratings, airmen and members of other security agencies of Operation LAFIYA DOLE commiserate with the families of the fallen Heroes.

” We assure you that as their blessed memories eternally remain with us, we are more resolute and decisive to bring terrorism and insurgency to an end in the North East.

He sympathized with as the fallen heroes and their families as well as relations saying, “I must also extend my sympathy to all those who have lost a relation, friend or associate or who have been affected in one way or the other by the dastardly and callous acts of suicide bombing by the terrorists”.

The Theater Commander also the troops to never to give up, ” I urge you not to give up, nor be intimidated. We must together fight the righteous battle of destroying the evil, called Boko Haram.”

He further appreciated members of the general public for their untiring support to troops in the ongoing counter terrorism and counter insurgency war in the North East, while imploring the public to continue to support the troops, a�?your troopsa�? by being vigilant in your homes, neighbourhood and communities.

Nicholas charged the public to also Identify strange persons or activities and promptly alert the security agencies while thanking the COAS foe his support ad encouragement.

“Be assured that whatever information you pass to us will be treated discreetly. Together, we must defeat our common adversary.”