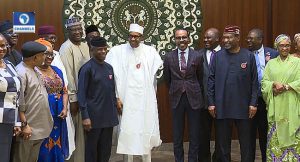 The committee which is made up of experienced economists and administrators is to be headed by a popular economist, Bismark Rewane.

Buhari while inauguration the committee on Wednesday, in Abuja, restated his commitment to paying the new minimum wage.

He said the committee would recommend “modalities for the implementation of the new minimum wage in such a manner as to minimise its inflationary impact, as well as ensure that its introduction does not lead to job losses.”

Buhari added that “the work of this Technical Committee will be the basis of a Finance Bill which will be submitted to the National Assembly, alongside the Minimum Wage Bill.

“I want to make it clear that there is no question about whether the National Minimum Wage will be reviewed upwards. I am committed to a review of the Minimum Wage.

“Also, it is important to explain that even though the subject of a National Minimum Wage is in the Exclusive Legislative List, we have been meeting with the State Governors because it is imperative that the Federal Government carries the State Governments along in determining any upward review of the minimum wage for workers.

“This is especially necessary considering the prevailing public sector revenue challenges, which have made it extremely difficult for some of the governors to pay workers as and when due.”

The appointment of the advisory committee comes a day after the Nigeria Labour Congress (NLC) held a  nationwide protest  over the N30,000 minimum wage.

Members of the union held the protest in various states  across the country .

Also in Abuja, the NLC leaders assembled at the Labour House for the protest. They said the protest is aimed at drawing the attention of all relevant individual and institutions to the urgent need to transmit the recommended N30,000 minimum wage to the National Assembly.