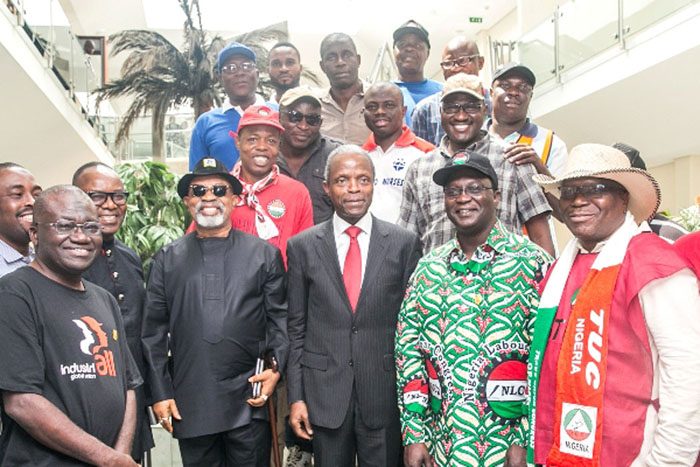 Thirty- six States Governors have on Tuesday agreed to pay a minimum wage of N22,500.

Rising from a meeting yesterday night in Abuja, the governors explained that it became imperative for them to take the position against the backdrop that the percentage of salaried workers was not more than 5% of the total working population.

Reading a communique at the end of the Emergency meeting, Governor of Zamfara State and Chairman of NGF, Abdulaziz Yari said that the position of the state Executives must not just reflect a figure, but also a sustainable strategy based on ability and capacity to pay, as well as reflective of all our developmental needs in each State.

Yari said, “Following a meeting of the Nigeria Governors’ Forum where we deliberated on the National Minimum Wage after a briefing from our representatives at the Tripartite Committee, we submit as follows:

“The welfare of all Nigerians is our ultimate concern. In all our States, we are concerned about the deteriorating economic situation experienced by the vulnerable segment of our population.

“In agreeing to a National Minimum Wage however, the Forum is even more concerned about development, particularly in the health, education and infrastructure spheres. It is not true that an upward review of minimum wage would trigger inflation as Waba said.

“It is therefore our considered position that since the percentage of salaried workers is not more than 5% of the total working population, our position must not just reflect a figure, but also a sustainable strategy based on ability and capacity to pay, as well as reflective of all our developmental needs in each State.

“Afterall, Section 3 of the National Salaries Income and Wages Commission Act provides that “the Commission shall recommend a proposition of income growth which should be initiated for wage increase and also examined the salary structure in public and private sector with reasonable features of relativity and maximum levels which are in consonance with the national economy.

“It is in this sense that we feel strongly that our acceptable minimum wage must be done in such a way that total personnel cost does not exceed 50% of the revenue available to each State. Govermors therefore agred to pay a mational minimum wage of N22,500.”

However, it was observed that the President of Nigeria Labour Congress, NLC, Mr Ayuba Waba, the Trade Union Congress (TUC) and the United Labour Congress (ULC) were absent at the meeting, just as the Minister of Finance, Zainab Ahmed shunned the meeting as well.

But the Minister of Labour, Senator Chris Ngige and his Budget and National Planning Counterpart, Senator Udoma Udo Udoma and Chairman, Salaries and Wages Commission were present.

Governors who were present at the meeting were those of Adamawa, Ebonyi, Edo, Ekiti, Imo, Kebbi, Lagos, Niger, Ogun, Ondo, Osun, Oyo, Plateau and Zamfara states.

Rivers Now Almost Always In The News For The Wrong Reasons, Laments Amaechi