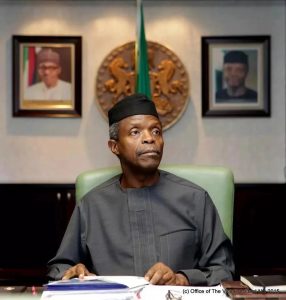 The Vice President, Professor Yemi Osinbajo, has met with some state governors and ministers over the minimum wage demanded by the organised labour in the country.

The meeting held behind closed doors on Monday at the Presidential Villa in Abuja, the nation’s capital.

He said although the governors were willing to pay the N30,000 new minimum wage demanded by workers, they lacked the capacity to do so.

Governor Yari disclosed that an emergency meeting of the Governors’ Forum would be convened on Tuesday.

Discussions at the meeting, according to him, will focus on finalising agreements on an exact minimum wage the states are willing to pay their workers.

The Federal Government convened the meeting one week after the organised labour threatened to embark on a fresh nationwide strike on November 6.

The labour body had disclosed its next move in a statement jointly signed by the leaders of the Nigeria Labour Congress (NLC) and the Trade Union Congress (TUC) on October 21.

It explained that the decision was necessary following what it described as the government’s unwillingness to implement a new minimum wage for workers in the country.