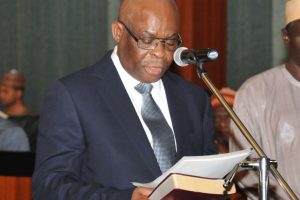 The three-man tribunal led by Danladi Umar also ordered Onnoghen’s removal as the Chairman of both the National Judicial Council and the Federal Judicial Service Commission.

It banned him from holding any public office for a period of 10 years.

The tribunal also ordered the forfeiture of the funds in the five bank accounts which the defendant was said to have failed to declare as part of his assets in breach of the Code of Conduct for Public Officers.

The tribunal, in its historic judgment on Thursday, convicted the former CJN on six counts including a specific allegation that he failed to declare his assets to the bureau between June 2005 and December 14, 2016.

It also found him guilty on the rest of the five counts, in which the defendant was alleged to have falsely declared his assets on December 14, 2016, by omitting to declare his domiciliary dollar, euro and pound sterling accounts as well as his two naira accounts, all domiciled in Standard Chartered Bank (Nig.) Ltd.

Convicting the erstwhile CJN on all the six counts, the tribunal chairman, who read the judgment, said, a�?Having regard to section 23(2) of the Code of Conduct Tribunal and Bureau Act, the defendant has clearly contravened the Code of Conduct for Public Officers and he is hereby convicted.a�?

The tribunal chairman then offered an opportunity to the ex-CJN to make an allocutus, that is, a plea for leniency.

But in response Onnoghen, who was seated in the dock throughout the proceedings, stood up and bowed as he said, a�?No comment.a�?

The chairman went on to impose the sentence, saying, a�?The defendant has clearly violated the Code of Conduct for Public Officers and he is accordingly sentenced as follows:

a�?The defendant is hereby banned from holding any public office for a period of 10 years.

The charges were filed against Onnoghen on January 11 and on January 23. The CCT then made an ex parte order directing President Muhammadu Buhari to suspend him pending the conclusion of his trial.

Enforcing the order, Buhari suspended him on January 25 and immediately swore the next most senior Justice of the Supreme Court, Justice Tanko Muhammad, as acting CJN, as stipulated in the CCT order.

On April 4, barely 24 hours after the NJC sent its recommendations on the allegations of misconduct levelled against Onnoghen to Buhari, the former CJN reportedly tendered his letter of voluntary resignation.

The recommendations of the NJC had yet to be made public but the council had said it refrained from investigating the petition which contained exact allegations as the charges Onnoghen was being prosecuted for at the CCT.

The CCT its judgment on Thursday said the prosecution led by Aliyu Umar (SAN), successfully proved all the elements of the offences of breach of Code of Conduct for Public Officers, saying it believed the evidence of the three prosecution witnesses who testified in the case.

The tribunal chairman noted that Onnoghen, who only called one witness failed to dispute the evidence of the three prosecution witnesses.

He added that Onnoghen had confessed to the crime by claiming to have forgotten to declare the five accounts.

The CCT noted that the defendant only called his driver, Mr Lawal Busari, as his only witness, who a�?did not say anything about the Form CCB 1, the assets declaration forms, submitted by the defendant.a�?

He noted that the confession was enough to convict the defendant.

a�?The statement of the defendant made in his hand writing alluding to forgetfulness to declare the five accounts is enough to hold that the defendant clearly contravened the Code of Conduct for Public Officers.a�?

Earlier in the Thursday’s proceedings that lasted about one hour 30 minutes, the tribunal delivered two reserved rulings, dismissing the two separate preliminary applications filed by Onnoghen.

One of the applications challenged the tribunal’s jurisdiction to hear the case while the other urged the CCT chairman to withdraw from further presiding over the trial on the basis of a likelihood of bias.

Regarding the one challenging the tribunal’s jurisdiction, the CCT said the Court of Appeal’s judgment in Federal Republic of Nigeria Vs. Nganjiwa, relied on by the defence was not applicable to the CCT which, according to him, is constitutionally empowered to have exclusive jurisdiction to entertain cases of alleged violations of the Code of Conduct for Public Officers.

The judgment of the Lagos Division of the Court of Appeal had prohibited the investigation and prosecution of serving judges unless they are first disciplined by the NJC.

Dismissing the application, the CCT ruled, a�?The defendant/applicant as the Chief Justice of Nigeria is not being charged as a public officer but as an ordinary public officer.a�?

The tribunal also a�?reversed itselfa�? in its decision in which it relied on the FRN Vs Nganjiwa case to dismiss the case of assets declaration breaches instituted against a Justice of the Supreme Court, Justice Sylvester Ngwuta.

Dismissing the second application, the CCT chairman said that the defendant’s allegation that he was likely to be biased and influenced by the executive arm of government was baseless.

He said there was no ongoing investigation or a pending bribery charge instituted against him by the Economic and Financial Crimes Commission as alleged by the defendant.

According to the judge, while the EFCC had issued him letters of exoneration, the charges filed against him by the commission through Mr Festus Keyamo (SAN), had been withdrawn on November 1, 2018.

He also said the fact that the CCT was under the Presidency did not imply that the tribunal would always succumb to the whims and caprices of the Presidency.

But a Senior Advocate of Nigeria, Mr Okon Efut, who is one of the leaders of Onnoghen’s legal team, described the conviction of the erstwhile CJN by the CCT as unconstitutional and premeditated.

Speaking with journalists on the premises of the CCT after judgment was passed on his client on Thursday, Efut said the CCT’s judgment would be appealed against at the Court of Appeal.

He said, a�?We know that all is not over in this matter. The wheel of justice grinds slowly. It grinds slowly but surely, this is not a matter that will end here. We shall avail ourselves of all the processes and the hierarchy of the judiciary.a�?

Efut described the judgment as unconstitutional as it breached the ex-CJN’s right to fair hearing.

He said, a�?So, it was fait accompli, it was premeditated. Judgment has been passed before today. Today’s judgment is just a formality.

a�?We hold the view that the tribunal has not only breached the Constitution of Nigeria, it has breached the fundamental principles of natural justice, equity and good conscience.

a�?It has not only been able to pass judgment, it has convicted on an offence that was never charged. This is an erosion of the fundamental principles of our constitution.a�?

Onnoghen appeals against conviction by CCT
Meanwhile, Onnoghen has filed 16 grounds notice of appeal before the Court of Appeal in Abuja, shortly after the judgment was delivered by the CCT on Thursday.

He insisted, among others, that he did not confess to the alleged offences, as held by the CCT. Chief Awomolo Adegboyega (SAN) topped the list of lawyers who filed the appealed on his behalf. The rest are Chief Chris Uche (SAN), Efut, Chief Ogwu Onoja (SAN), and George Ibrahim.

They claimed that the lower tribunal erred in law when it held that the appellant confessed to the charges framed by admission and use that as a basis to hold that the appellant did not declare his assets from year 2005 when he became a Justice of the Supreme Court and thus occasioned a gross miscarriage of justice.

They added, a�?The appellant did not admit the fact of non-declaration of assets from year 2005 as Justice of the Supreme Court. The appellant only stated that he did not declare his assets in 2009 as required by law because he forgot and did the declaration immediately he realised same.

a�?By the evidence of DW1 (first defence  witness, Lawal Busari who is Onnoghen’s driver), and Exhibit DW2 tendered, it has affirmed the statement of the appellant that he forgot to make a declaration in 2009 but did in 2010 when he remembered showing there was a declaration after contrary to Count 1 of the charge.a�?

He also faulted the judgment on the grounds that the tribunal erred when it held that the evidence of DW1 did not create reasonable doubt on the evidence of the prosecution witnesses that the appellant did not make declaration of assets since 2005.

The defence lawyers contended among others that the tribunal erred in law when a�?it placed the burden of proving his innocence on him in violation of Section 36(5) of the 1999 Constitution and Section 135(1) of the Evidence Act, 2011.a�?

However, an Anti-corruption group, Socio-Economic Rights and Accountability Project, has said it welcomes Onnoghen’s conviction.

SERAP, while hailing the decision, said it should set the standard for all public officials, as regards the declaration of their assets in compliance with the law.

It said as a result, it had written the CCB demanding the details of the assets declared by all the Presidents and state governors since return to democracy in 1999.

In a statement by its Deputy Director, Kolawole Oludare, SERAP said it wanted the Chairman of the CCB, Dr Muhammed Isah, to supply it with a�?information on specific details of asset declaration forms submitted to the CCB by successive Presidents and state governors since the return of democracy in 1999.a�?

It said, a�?While we welcome the judgment by the Code of Conduct Tribunal on Justice Walter Onnoghen, we now urge the CCB to extend its mandates to enforce constitutional provisions on asset declarations by public officers to cover elected officers and to vigorously pursue the prosecution of any such officers who use their powers either as presidents or governors over public funds to enrich themselves.

a�?Publishing the asset declarations of elected public officers since the return of democracy in 1999 to date would improve public trust in the ability of the bureau to effectively discharge its mandates.

a�?This would in turn put pressure on public officers like presidents and state governors to make voluntary public declaration of their assets.a�?

CACOL hails judgment
Also, the Centre for Anti-Corruption and Open Leadership hailed Onnoghen’s conviction, saying it would serve as a deterrent to other public officers.

A statement by CACOL’s Coordinator for Research and Documentation, Mr Okechukwu Ndiribe, quoted the organisation’s Executive Chairman, Mr Debo Adeniran, as saying that the CCT’s verdict sacking Onnoghen had vindicated his position that the ex-CJN should not have stayed one day longer in office after his admission to the non-declaration of asset allegations.

Onnoghen has strong grounds of appeal a�� Fashanu

Another SAN, Mr Babatunde Fashanu, said he held the view that the CCT wrongly assumed jurisdiction to entertain the charges against Onnoghen, saying the suspended CJN had strong grounds of appeal.

He said, a�?Whatever statute gives the CCT the power to prosecute is subject to the constitution that empowers the NJC to handle disciplinary issues against judicial officers. According to the decision in Justice Nganjiwa’s case, the Court of Appeal said you could not charge a judge for something relating to his office, including bribery and non-declaration of assets without first going through the NJC. That Court of Appeal’s decision is the law for now.a�?

On its part, a coalition of civil society groups has described the trial and conviction of Onnoghen as an assault on the judiciary by the executive.

The groups comprising the Coalition in Defence of Nigerian Democracy and Constitution, Concerned Nigerians, Free Nigeria Movement and MadConnect, said in a statement on Thursday that the judiciary had never been assaulted as it was under the Buhari administration.