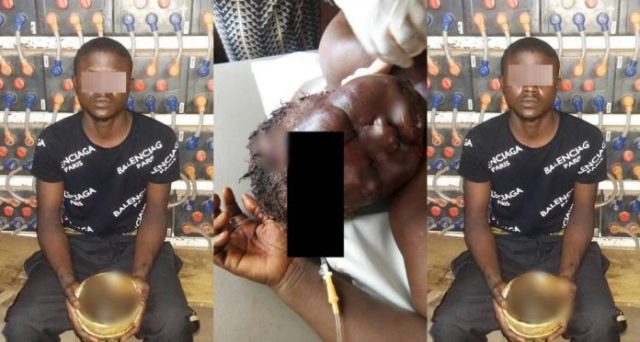 Men of the Edo State Police Command have arrested a 21-year old man, Samuel Emobor Oghenekporboro, for allegedly killing his mother and making love to her corpse several times for money ritual.

His 58 years old mother identified as Mrs Christiana Ighoyivwi was said to have been strangulated at their residence at 8B, Market road, Ologbo Community along Benin- Sapele road in Ikpoba-Okha local government area.

It was gathered that an herbalist had told the suspect that money would fall from heaven while making love with his mother’s corpse.

Sources said it was a grandmother of the suspect, Mrs Maria Gabriel, that caught him having sex with the corpse.

She was at the residence at about 6 am to invite her late daughter to a nearby church for morning prayers when she caught the suspect.

The old woman was said to have knocked repeatedly on her daughter’s (victim) door but nobody responded and raised an alarm after peeing through the door.

The suspects who opened the door and attempted to escape was held by neighbours who handed him over to the police.

Sources said semen-stained pants belonging to the suspect and his late mother were recovered from the room as exhibits by the police.

It was gathered that the suspect told interrogators that he thought money would rain from heaven after killing his mother and making love to her.

The spokesman for Edo Police Command, DSP Chidi Nwabuzor, said the investigation was ongoing saying the suspect would be arraigned soon.