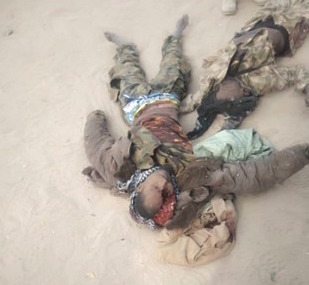 In a clear display of misguided desperation to stage a reprisal following the recent neutralisation of several of their top commanders by troops of Operation LAFIYA DOLE, on 6 January 2020, some marauding elements of the criminal Boko Haram insurgents laid and eventually sprung an ambush against the convoy of the Theater Commander Operation LAFIYA DOLE, Major General Olusegun Adeniyi. The Theatre Commander’s convoy came under the criminals ineffective and uncoordinated fire from Anti-Aircraft Guns, Machines Guns, Rocket Propelled Grenades and some of their foot soldiers about 2 Kilometers to Auno in Kaga LGA of Borno State while returning from Jakana where he visited troops’ location following his earlier meeting with the Executive Governor of Borno State, Professor Babagana Umara Zulum at Auno.

In a commendable demonstration of bold action in battle, the Theatre Commander led the gallant troops of his convoy to engage the criminal Boko Haram Insurgents with superior fire power, subduing them and thereafter assaulting the ambush site with his men thereby causing the criminal insurgents to flee the location in disarray. Other senior military officers in the Theatre Commanders’ convoy at the time of the ambush include the Deputy Theatre Commander, Maj Gen MG Ali, Brig Gen EI Eze, Brig Gen SI Igbinomwanya and Lt AA Tejuoso. In the aftermath of the encounter, several Boko Haram criminal insurgents were decimated. Additionally, 20 rounds of 7.62mm Special ammunition, 2 rounds of 7.62mm NATO ammunition, one camouflage trouser, one Nigeria Police Force fragmental jacket, 2 AK 47 Rifles and 3 AK 47 Rifle magazines were captured from the fleeing insurgents. Thereafter, the Theatre Commander Major General Olusegun Adeniyi and his convoy continued their trip and have since returned safely to the Headquarters Theatre Command Operation LAFIYA DOLE in Maiduguri. Regrettably, 2 soldiers were wounded in action during the encounter. The Wounded soldiers are currently receiving treatment at a military medical facility and are responding positively to treatment.

To this end, the Theatre Commander, on behalf of the Chief of Army Staff, Lieutenant General Turkur Yusufu Buratai congratulates the troops for their resilience and courage and urges them not to relent in their efforts until all the remnants of the Boko Haram and ISWAP criminal insurgents are completely annihilated and defeated.

Timing And Duration Of Salat