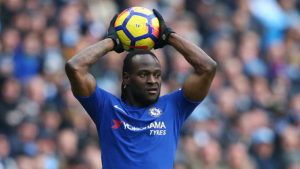 The wing-back gave the assist for Olivier Giroud’s match-winning effort in the first half, while his African counterparts; Sadio Mane and Mohamed Salah lost with the Reds.

In the 32nd minute, the Nigeria international beat left-back Andy Robertson to deliver a cross which was met by Giroud’s head to give Antonio Conte’s men the maximum points.

The former Liverpool player would have finished the tie with two assists but was unlucky just as Marcos Alonso whose ferocious volley off his inch-perfect cross flashed past Loris Karius post.

While Mane had a decent game for Jurgen Klopp’s side, 43-goal attacker Salah – on his 50th appearance for the club – struggled to exert the sort of influence that saw him beat Manchester City’s Kevin De Bruyne to the PFA and PWA Player of the Year award.

Such was his display on his return to Stamford Bridge that he had fewer touches [12] than any other player on the pitch in the first half. And his frustration was summed up with a booking for simulation at the edge of Chelsea’s box.

Salah and Mane, later joined by Dominic Solanke, finished the tie but Moses was taken off late in the game for Davide Zappacosta.

His third assist of the season put the Blues back in contention for a top-four finish, thus, leaving them with hopes of a Champions League spot next season