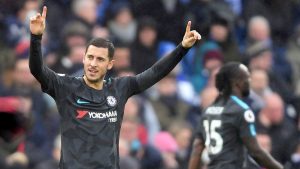 Victor Moses rounded up a four-star performance as Chelsea cruised to a 4-0 victory at Brighton & Hove Albion in the English Premier League for their first league win of 2018.

Chelsea’s midweek penalty kick shootout success over Norwich City in the English FA Cup meant they had drawn their last five games in regulation time in all competitions.

But Eden Hazard and Willian struck inside six minutes to set them on their way on Saturday.

Brighton tried to get back into the match but were denied by the bar, and some fine saves by Willy Caballero.

He was making his first league start for Chelsea in place of injured Thibaut Courtois.

The hosts also had two penalty kick appeals waved away by the referee.

With Brighton pushing forward, Hazard brilliantly netted a third 13 minutes from time before Moses made it four late on.

The win took Chelsea above Liverpool a�� who play on Monday a�� into third.

One win in 13 league games leaves Brighton in 16th place.(Reuters/NAN)