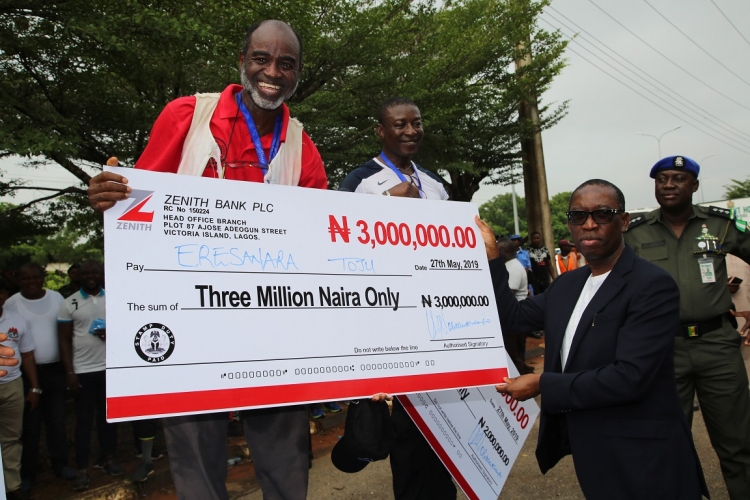 A single mother of three children slumped and died during the Annual Elders’ Tournament Walk, with the theme, “Walk To Health”, organized by the Delta state government.

The woman, it was gathered, slumped Monday at around Total petrol station by traffic light less than two kilometers into the walk which commenced at Abraka Junction in Asaba through Dennis Osadebay Way, Nnebisi Road, Anwai road through to Government House, Asaba.

The 10 kilometer walk that was restricted to only Deltans between the ages of 55 and 70 years was without gender discrimination.

The deceased who was identified as Lovett Ighorodhe, is said to be a teacher at the Asagba Secondary school, Asaba.

A source in the school who spoke to The Nigerian Voice on condition of anonymity, said the woman was hale and hearty when she left for the walk, adding that she is a native of Aboh, Ndokwa East local government area of the state and in her 50s.

The corpse was said to have been deposited at the morgue of the Federal Medical Centre (FMC), Asaba.

The source said “the news of her death came to us as a rude shock. If anybody had told us that she will die even two years time, we would have doubted it”.

While describing her as a lively person, the source disclosed that the woman was in the Guidance and Counselling Unit in the school.

Our correspondent reliably gathered that the woman would be buried on 22nd June.

Meanwhile, Governor Ifeanyi Okowa who received the participants at Government House, expressed joy that elders came out to participate actively in the walk.

Okowa said: “I am glad that this tournament is taking place as it will help us to keep fit and be healthy. Nigerians need to be encouraged to take a walk as it is good for our health and brain and I want to assure everybody that this tournament will be an annual event.

“I want to urge you to always take a walk at least twice a week so as to remain in good health,” commending the organizers and participants in the walk for the colourful tournament.

Dr. Toju Eresanara who came out first in the walk, got the sum of N3 million as prize while his runners up, Mr Hycinth Osuhor and Mr Ojubana Peter got the sums of N2 million and N1 million respectively.