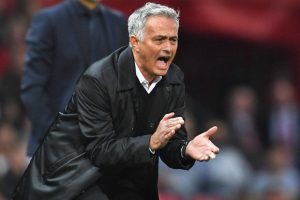 Jose Mourinho found himself caught up in a touchline tussle on his return to Stamford Bridge as a member of Chelsea’s coaching staff celebrated a late leveller for the Blues in front of the Manchester United manager.

Marco Ianni, who is a second assistant to Maurizio Sarri, took great delight in seeing  Ross Barkley snatch a 2-2 draw in stoppage-time .

He jumped off his seat upon seeing the ball hit the net and made a point of expressing his delight in front of Mourinho, who remained rooted to his bench.

Ianni swung a clenched fist in front of the Portuguese, who did not take kindly to being provoked at such an emotional moment.

Mourinho took off after his rival and had to be held back as a mass brawl broke out at the entrance to the Chelsea tunnel.

Backroom teams from both sides, along with security officials, were caught up in the tussle before players also got involved.

United’s manager was incensed and made his feelings clear to those in the opposing dugout.

Order was eventually restored, but there were further scuffles on the field before the full-time whistle went.

Mourinho had vowed to keep his cool heading into a highly-charged fixture, telling reporters: “Would I celebrate like crazy if my team score a goal at Stamford Bridge or my team wins at Stamford Bridge? I don’t think so.

“I think I would try to control myself and to respect the stadium and the supporters that were my supporters and stadium for many years, to do that should be something if I completely lost my emotional control, which is not easy.”

After being caught up in an unfortunate flashpoint, Mourinho later made his way from the touchline holding up three fingers to Chelsea supporters.

He found himself targeted by a fan base which once adored him following the tunnel melee and, having done so before, was keen to remind his detractors what he once achieved in west London.

Mourinho landed three Premier League titles over the course of two spells at Stamford Bridge, but is now viewed as a fierce rival after taking the reins at Old Trafford.

He was keen to brush off the incident with Ianni afterwards, telling  Sky Sports : “Oh come on, I can tell you that 97 minutes of the game was so good that you have to focus on that.

“I did not get respect back from Chelsea [fans] but that is not my responsibility. What I did here today I will do in Madrid, in Milan, in Porto, the reaction from the fans is not up to me.

“I am not annoyed with anything. What happened with Sarri’s assistant, Sarri was the first one to come to me and say he will resolve it. The assistant has already come to me and apologised, I told him to forget it. I have made a lot of mistakes in my career.”

United will be understandably disappointed to have seen two points slip through their grasp in dramatic fashion during their latest visit to the capital, but they had battled back from a goal down to lead through two Anthony Martial efforts.

Chelsea, meanwhile, remain unbeaten and seven points in front of the Red Devils.

Mary Onyali – Dont Expect Too Much From Team Nigeria

Rex Tillerson out as Secretary of State, replaced by CIA Director Mike Pompeo