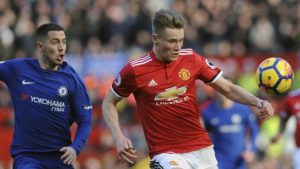 Jose Mourinho had a better game plan, better substitutions, and perhaps most critically the better of luck as Manchester United came back to defeat Chelsea 2-1 at Old Trafford on Sunday.

Romelu Lukaku  had a goal and an assist, and both  Jesse Lingard  and  Eric Bailly  were good off the bench in the win.

United reaped the rewards of a razor-thin offside call denying a late Cesc Fabregas goal as well as Alvaro Morata blasting the ball off the cross bar early and  Andreas Christensen ‘s head injury going unseen by the official in the lead-up to the Lukaku goal.

But make no mistake: after coming back from a slow start against an in-form opponent, United deserves the three points that split the season series.

Mourinho deferred to his players for the performance, mostly, and was effusive in his praise of Chelsea.

a�?They started very well. It’s as simple as that. When they hit the post, I was looking to my players and I was thinking, a�?What can we do? Who can I blame?a�? It was so well-played, so beautifully played, there is nothing to say. They have a very good team. They have a fantastic dynamic. I was trying to find a way for my players to be dangerous in the interior because through the sides they are very strong, so we found a way to play against them where we didn’t concede much.a�?

He did, however, note that the Red Devils had  Eden Hazard  in his their pocket for a second-straight match:

a�?We had control of Eden.  Willian , of course, is an amazing player and in that action he killed us but with the production of the game we had more and more control of the game. That’s the way I was expecting the game (to go).a�?

Considering the way Hazard disappeared in Mourinho’s final year at Stamford Bridge, it’s little surprise the ex-Chelsea boss relishes the opportunity to dismiss the player in a quote.