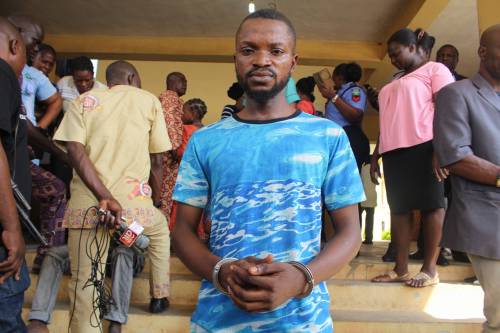 Seidu Sakiru Adeyemi, boyfriend and suspected killer of Khadijat Oluboyo, daughter of the immediate past Deputy Governor of Ondo State, has been paraded by the Police.

Adeyemi was paraded Wednesday before journalists at the headquarters of the Ondo State Police Command in Akure.

Khadijat's body was discovered on Sunday evening under the bed at Adeyemi’s residence in Akure.

Speaking, the suspect, popularly called QS, narrated how the deceased visited him at his residence at Adegbolarin layout, Aratunsin, Akure in company of two other strange boys.

He denied killing Miss Khadijat, noting that she was killed by the other two boys who came visiting with her.

“She sent me the soft copy of her project on the Whatsapp and told me that she would be leaving Lagos for Akungba on Sunday,” Adeyemi said.

“On Monday, I received a text message from her that I should send her N2,000 but I was only able to raise N1,000 for her because I didn't have much money.

“But few hours later, I heard a knock on my door and when I opened, she [Khadijat] was the person I saw and I quickly asked her why she didn't tell me she was coming to visit me.

“Shortly after, she went out of the room and called in two other boys. She said a boy would be visiting her, but when she came in with the boys I was not comfortable and had to excuse them.

“Later, one of the boys came out to call me and by the time I would enter back into the room, they were with guns and they threatened me.

“One of the boys was even on top of Khadijat on the bed and ordered me to kneel down on the rug and threatened me not to make any move but later they told me to go out and bring a digger.

“By the time I would come back, they had already killed Khadijat and asked me not to tell anyone and they instructed me to dig a big hole so they could bury her…”

11 thoughts on “Murder Of Daughter Of Former Ondo State Deputy Gov.: Boyfriend Narrates How She was Killed”