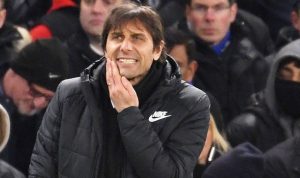 Chelsea manager Antonio Conte says he will make his future plans known only at the end of the season.

Speculation over Conte’s future has been ongoing all season, as the Chelsea manager has been linked with the exit door due to his strained relationships with the hierarchy at the club.

Chelsea are battling for Champions League qualification through a top-four finish in the Premier League, with the gap closed this weekend on both Tottenham and Liverpool.

They also have an FA Cup final against Manchester United, but they first must focus on two more league games against Huddersfield and Newcastle United.

Conte says that he isn’t interested in speculation, after previously stating he will see out his contract which expires at the end of next season.

However, he admits that there will be a clearer picture after the final ball is kicked, with questions on his future unlikely to stop.

“I think and I am sure that I am Chelsea’s coach and my focus is only on this,” Conte told reporters at Cobham Training Ground. “It is very difficult to comment on any speculation also because there have been speculations around me from the start of the season, after our first game against Burnley.

“I think you understood that this speculation is not important for me because my focus is only to work in the best possible way with my players. I am doing this from the start, until the end. There are only two weeks and then this season will finish.

“You will then know if there is a different situation, or if you see me again next season, and we start again from the first game speculation about my future.

“I am very focused on trying to finish the season in the best possible way and I try to transfer my will to my players because the fans deserve this.”

“My focus is only to Chelsea. The future? You never know what will happen because our job is very difficult. You have to be ready for everything.”

Chelsea remain outsiders to qualify for the Champions League despite a four-game winning run in the league, and they likely need to win both remaining league games to qualify for Europe’s elite competition.

Since Roman Abramovich took over the Stamford Bridge in 2003, the club has gained a reputation for the quick hiring and firing of managers. Conte thinks that this could still pose an issue in the summer, as he was asked whether he wants to remain at one club for a long time in his career.

If Conte does leave Chelsea in the summer, the match against Huddersfield on Wednesday will be his last one at Stamford Bridge.

167 thoughts on “My future will be clear in two weeks, says Conte”