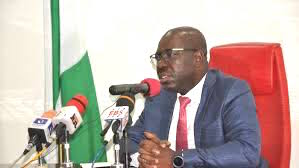 Edo State Governor, Godwin Obaseki, says his mission is to put an end to godfatherism and uphold the interest of the people.

The governor said this while hosting ward leaders of the All Progressives Congress (APC) in Oredo local government area of the state.

He said, “Comrade Oshiomhole came to me, asking that we join forces to fight and bring an end to the practice of godfatherism in the state. ”

“The partnership helped us in changing the narrative of development in the state. This led me into politics. I am into politics to better the lives of Edo people. We believed Oshiomhole and followed him to fight godfatherism.

He added that, “Any politics that doesn’t benefit the majority of the people is bad politics. The resources we have in the state is to be used for the benefits of the people of Edo State, not a few politicians. ”

“Our people have no business being poor but our leadership has brought us here.”

“I am in politics to improve the life of Edo people. We have done more in three years with less resources. Imagine what will happen in eight years,” he said.

“When they say I am a mosquito, I was never worried; I told them that mosquitoes can bite. The bite can cause malaria and if not well-treated, it can kill someone. Those bitten are already on life support but we pray they don’t die.

“The last time an incumbent ran for governorship in our party in the state, it was a consensus.

“It will happen again; we will all agree on consensus. Whether direct or indirect primary, you, the people, will vote. Our plan is on the election, not the primaries.

“God has continued to fight for us. All the strategies and antics against this government has failed. We will build this party and you will be the envy of all others who are not in our party but we are sure they will join us soon.”

Anambra Poll: This Race is Still about Obiano

I will never please my children at detriment of Nigerians: Buhari

15 thoughts on “My Mission Is To End Godfatherism In Edo State Politics – Gov. Godwin Obaseki”