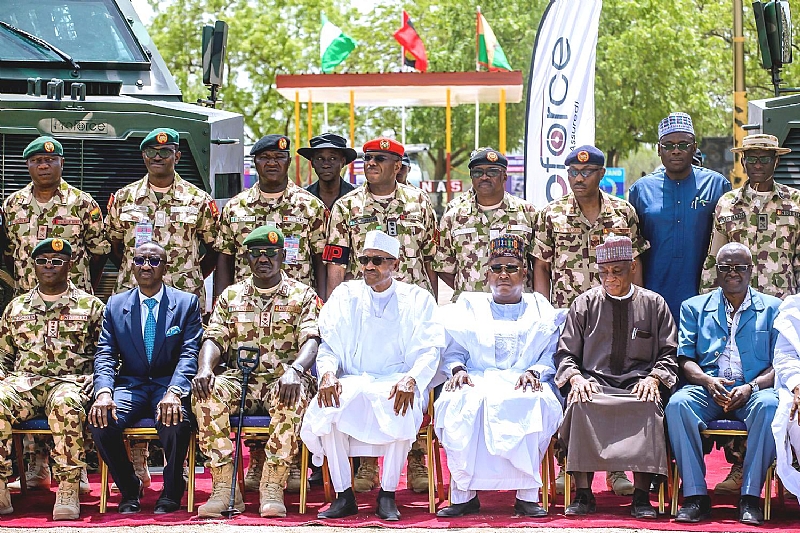 President Muhammadu Buhari on Friday in Monguno town of Monguno LGA of Borno state pledged to fish out and punish politicians who are deliberately instigating violence in some states of the federation as a way of seeking relevance in the country’s polity.

The President while speaking as the Special Guest of Honour at the closing events of the 2018 Army Day celebrations which the army chose to stage in the one-time stronghold of Boko Haram terrorists, 136 kilometers from Maiduguri, Monguno town, reiterated what he told Christian leaders on Thursday, that a solution was being found to the deadly clashes between farmers and herdsmen, and whosoever will be found culpable, will be brought to justice.

Appreciating the efforts and sacrifices of the Nigerian armed forces for keeping the country safe, President Buhari acknowledged that there were still challenges faced by the nation: “This does not mean there are no challenges. “

“There are pockets of violence in several states. Some deliberately instigated by disgruntled politicians who have lost all arguments and are desperate to cause mayhem as a way of seeking relevance.

“We shall fish them out and punish them according to the provisions of the law,” Buhari said.

Making a self-assessment of the administration that he has led in the last three years since his election, the President said, “We have worked tirelessly to ensure and preserve the dignity and sanctity of life.

“When I was sworn in as the President and Commander-in-Chief of the Armed Forces of the Federal Republic of Nigeria, I promised that this administration would tackle the challenges of Insecurity, poor Economy and Fight Corruption.

“We are all witnesses to the fact that our once battered economy as a nation has exited recession and is once again vibrant. Our nation is safe again, thanks to the efforts of our security agencies.

“I want to use this opportunity to reassure the world, Nigerians and the families of the remaining kidnapped Chibok girls and Leah Sharebu of the Dapchi School girls that this administration will not relent in our efforts to see that they are all released.

“I also want to reassure all Nigerians that the issue of Farmers and Herdsmen clashes is being tackled and all those found culpable would be brought to justice.

” Let me quickly remind us at this point to always be tolerant, loving and ready to give peace a chance,” Buhari added.

President Buhari further repeated what he said to the Christian Association of Nigeria, Northern Chapter, that none of our religions or cultures permitted the killing of one person by another.

While Governor Kashim Shettima of Borno State who spoke at the occasion said triumphantly that, “we have cut the Rubicon of insurgency in the Northeast,

” Thank God; we have come to the end of insurgency. Suicide attack is a sign of weakness, not strength,” Shettima said.

The Minister of Defence, Brigadier-General Mansur Dan Ali (Rtd) commended the army for establishing a motorcycle battalion that is enhancing quick mobility and providing security in areas of unfavourable vehicular movements, and the Air Force for setting up rapid response groups in the six geopolitical zones of the country.

He assured that “appropriate measures are being put in place to address security challenges in the nation; the Armed Forces are currently handling Operation Delta Safe in the South-South,

“Operation Safe Haven in the North Central and Operation Awatse to combat militant activities in the Arepo general area and other parts of the Southwest.

In his speech, the Chief of Defence Staff, General Gabriel Olonisakin said that the military operations in the Northeast were moving from engagements of a combat nature to humanitarian and civilian support services to assist the victims of the insurgency to return to their communities which they were forced to abandon.

While the Chief of Army Staff, General Tukur Yusuf Buratai said the choice of Monguno for the 2018 events was intended to celebrate the achievements of the army in its combat efficiency, civil-military relations and its efforts in research, development and technological attainments.

He said the army had accomplished the President’s objective of stabilizing the Northeast and other parts of the country, and assured of their unwavering support and loyalty to the President and the constitution.

Before his departure, the President also toured one of the largest camps housing Internally Displaced Persons, IDPs in Monguno town.

10 thoughts on “NADCEL 2018: Buharri Pledges to fish out and punish politicians sponsoring violence in country”