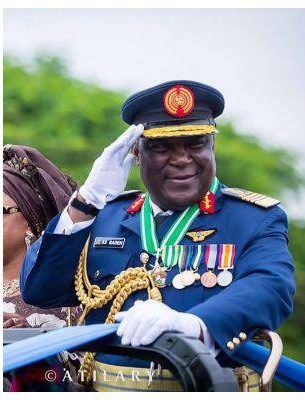 DETAILS: On the 18th December, 2018 at about I835hrs the fonner Chief of Defence Staff, Air Chief Marshal Alex Badeh (rtd) while returning from his farm located in Panda Development Area, Karu LGA was attacked by gunmen at Tudu-Uku slong Gitata-Keffi Road. He was in company of his friend and driver when unknown gunmen ambushed and opened fire on bis moving vehicle . The formerChief of Defense Staff suffered gunshot injury which resulted to his death, while his driver was injured and the said friend abducted. The Corpse of the late Air Chief Marshal and the injured driver has been taken to NAF Hospital, Abuja.

Following the directive of the Inspector-General ofPolice, IGP Ibrahim K. Idris, NPM, theCommissioner of Police Nasarawa State, CP YahayaBello psc(+) and some senior military personnel have visited the scene alongside IGP's intelligence Response Team (lRT) and Special Tactical Squad(STS) who are to carryout discrete investigation into the case

Meanwhile, the Police Command, Nigerian Army and Air Force Personnel led by DeputyCommissioner of Police were in the area immediately the incident occurred with a view to rescue the abducted person and arrest the perpetrators of this dastardly act.

Finally, the Cmmiissioner of Police Nasarawa is calling on the general public with useful infonation that can aid the ongoing investigation to come forward with it and it shall be treated with utmost confidentiality

Severe Heat: Dozens Die In India, Government To Give Families $5,700