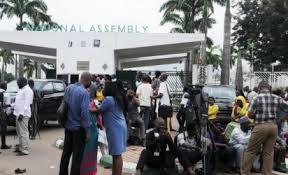 The horizon is looking ominous for Nigeria. Under President Muhammadu Buhari, the country is rapidly descending into a full-blown dictatorship. With scant regard for the separation of powers, the rule of law and the tenets that underpin a sound democracy, masked State Security Service and police officers invaded the National Assembly early in the morning on Tuesday in Abuja. The officers prevented the legislators, who had convened an emergency session, from deliberating. But in an uncharacteristically swift response from the Presidency, the Acting President, Yemi Osinbajo, sacked the Director-General of the SSS, Lawal Daura.

Rightly, Osinbajo described the unauthorised takeover of the National Assembly complex “as a gross violation of constitutional order, rule of law and all acceptable notions of law and order.”The essence of constitutional government is to ensure that the powers of the state are kept in check so that personal liberty would not be infringed. The scene that played out at the Three Arms Zone on Tuesday is a throwback to full military dictatorship, which ceased to be in 1999 when the Fourth Republic came into being. For masked SSS officers to have locked out legislators and NASS members of staff from their chambers and offices was reckless and unconscionable. Although some NASS members confronted the SSS operatives, they refused to do the right thing. These types of breaches occur only in banana republics, where the rule of law is in abeyance and government has become unpopular.

Though the Acting President claimed that the unlawful act was done without the knowledge of the Presidency, it didn't come out of the blue. Before now, cases of abuse of power by the Buhari government had become more prolific and severe. In July 2016, the SSS operatives reportedly rounded up principal officers of the Zamfara State legislature and took them to Abuja, where they were detained. Their only offence was their move to press impeachment charges against the state governor, Abdulaziz Yari. In early 2016, there was a clampdown on peaceful protests held in several cities to highlight the economic hardship citizens were passing through and failure of government's policies to address it, even when the then Acting President, Osinbajo, avowed the administration's acknowledgement of peaceful protests as the “fundamental right of the people.” Daura has taken Nigeria for a ride for too long!

The abuse of power is only reaching epidemic proportions as the 2019 elections draw nearer. For the past three weeks, Nigeria has been awash with tales of use, misuse and outright abuse of power. The upheaval began on July 24 when 14 senators and 37 House of Representatives members defected from the ruling All Progressives Congress to other parties, particularly the Peoples Democratic Party. This seemingly altered the balance of power against the APC, especially when the Senate President, Bukola Saraki, announced his own defection from the APC to the PDP.

On the day of defection, the police and Economic and Financial Crimes Commission officers had invaded the Abuja homes of Saraki and Ike Ekweremadu, the Deputy Senate President, preventing them from leaving their homes. Events escalated quickly with the defections of Governors Samuel Ortom of Benue, Abdulfatah Ahmed of Kwara and Aminu Tambuwal of Sokoto states, from the APC to the PDP. But the trend of violating the sanctity of the legislative arm of government first came to the fore forcefully in Benue when the police locked down the state assembly and aided eight minority lawmakers, in an assembly of 30 members, to launch impeachment proceedings against Ortom. The EFCC is also probing Ortom's spending of security vote.

These cases are no doubt disturbing. Specifically on Ortom's travails, Nobel laureate, Wole Soyinka, says, “Coincidences are, by their very nature, suspect, and I certainly perceive the beginnings of a heavy-handed campaign of reprisals from ruling circles over your political decision…This bodes ill for the nation. It goes beyond any immediately-affected state and alerts us all to fascistic threats against a common democratic destination, and the basic right of free choice of political paths towards its attainment.” We agree.

Put bluntly, Buhari bears the responsibility and blame for this avoidable or needless recourse to naked abuse of power to further personal political interests. Perhaps, the most deeply depressing aspect of Buhari's dictatorial tendency is that it is not shocking. In 2015, many had doubted his claims of democratic metamorphosis. In response, Buhari pledged in his inaugural speech, “The Federal Executive under my watch will not seek to encroach on the duties and functions of the Legislative and Judicial arms of government. The law enforcing authorities will be charged to operate within the Constitution.” Nigerians now know better.

The founding fathers of democracy saw the danger of vesting the powers of government in one person; and therefore separated them into three: the Executive, Judiciary and Legislature. Undoubtedly, the parliament is the unmistakable symbol of democracy. Its abrogation, while the other two arms continue to exist in the event of military intervention, underscores this point.

Buhari should halt this dictatorial tendency. While we will be the first to assert the bedrock principle that no one is above the law, the recent events have crossed the line from law enforcement into a brazen intolerance for dissent. Noah Feldman, a constitutional law professor at Harvard Law School, says, “The people with the guns listen to the president. So if the president marched in and had a Supreme Court justice removed, you'd need some way to respond to that. That's a high crime.”

The loss of trust in someone in whom voters had placed so much hope in 2015 is disturbing. Our state institutions should be seen to be conscientious and accountable. Buhari should refrain from further plunging Nigeria deeper into an abyss of unnecessary crisis, the type that is capable of showing the country in a bad light. A country already blighted by unprecedented levels of insecurity – terrorism, militancy, robbery, uncontrolled bloodbath and other acts of criminality – should not allow herself to be sucked in by an eddy of self-contrived political instability. What is happening does not bode well both for Nigeria's political stability and economic prosperity. A country very much in need of foreign direct investment should be more tactful in her actions, especially in portraying herself to the outside world as an embodiment of the rule of law, not as an arena for rascals to exhibit lawlessness and impunity. No investor would take Nigeria seriously enough to consider her a destination for investment when the environment does not suggest that it would be safe and protected.

Besides, as the country to which leadership is naturally bestowed in Africa, Nigeria should not be seen to be promoting the kind of political intolerance associated with countries such as Zimbabwe, Burundi and Democratic Republic of Congo, for example, where opposition to government is always met with a serious crackdown. These countries, including Nigeria, would have experienced a far higher level of development if they had inculcated the politics of tolerance and inclusiveness. It is only a government that has become very unpopular that behaves this way; it shows a level of desperation to hold on to power – at all costs.

Nigeria should not be seen as one of the countries where the President, at the least provocation, has to deploy state security apparatus against the opposition. Nigerians have a duty to speak up now, defend democracy and make it clear that they will not tolerate any form of abuse of power.