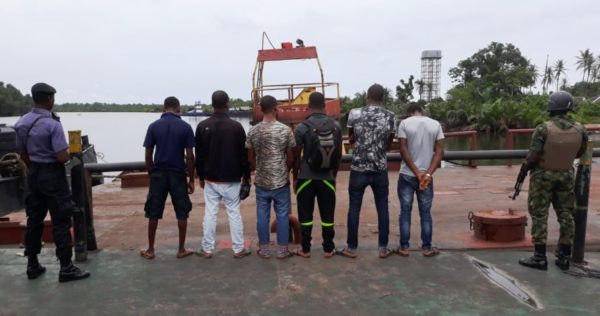 Commanding Officer of the Nigerian Navy Forward Operating Base in Bonny, Rivers State, Capt. Suleiman Olorundare, said this in an interview with reporters on Wednesday.

Olorundare said that naval investigators were yet to conclude with preliminary investigation to ascertain the source of the product, supplier and receiver of the petroleum product.

He said, “On Feb. 6, a tugboat, MV Mabel II and barge, Paradi, were intercepted by troops on night patrol at Bonny waters in the state.

Olorundare said the arrest and seizure were conducted in line with the directive of the Chief of the Naval Staff, Vice Adm. Ibok-Ete Ibas, to stop illegalities in the nation’s maritime environment.

He said, “The petroleum product will be evacuated and measured in a conducive environment to avoid environmental degradation.

“The barge is 1,000 metric tonnes (1 million litres) in size. We have been unable to authenticate the quantity of the content due to unavailability of calibration chart.”

Olorundare added that the navy was winning the fight against oil thieves, illegal bunkers, sea robbers and pirates operating in Rivers maritime domain.

He warned criminals to steer clear of waterways and assured merchant traders of their safety while carrying out their legitimate activities in the area.

An EFCC official, Abdulhamid Bawa, said the commission would conduct speedy investigation into the matter.

According to him, the suspects will be arraigned and if found culpable would be appropriately dealt with in accordance with the laws of the land.

The captain of MV Mabel II, Lucky Emmanuel, said that the diesel was lifted in the state.

Emmanuel claimed they were hired and were on their way to deliver the petroleum product to Stendle Limited in Port Harcourt when they were arrested by naval personnel.

The suspect admitted to the crime and pleaded for leniency.

How to tackle challenges of Sugar Sufficiency in Nigeria – Kabiru Rabiu

25 thoughts on “Navy seizes tugboat, barge with suspected stolen AGO”