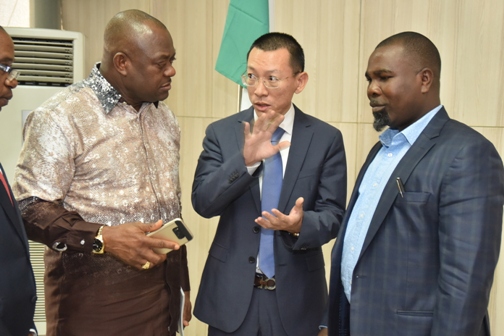 The NDDC Managing Director, Mr. Nsima Ekere, stated this during a meeting with officials of the Chinese company at the Commissiona��s headquarters in Port Harcourt. He remarked that the NDDC was looking for ways to stimulate industrial growth in the Niger Delta region.

Ekere, who was represented by the NDDC Executive Director Projects, Engr. (Dr) Samuel Adjogbe, observed that activities in the Niger Delta region revolved almost exclusively around oil and gas business.

According to the NDDC boss, a�?we have looked at some indicators, and it is obvious that the power requirement for industrial growth in the region is not available. So, we need to make a deliberate effort to set up projects that can boost power and attract investors to the region.a�?

He said that NDDC was interested in setting up the regional power pool to help provide adequate power that would be subsidized for the industrial parks planned for the nine states of the region. The power pool arrangement, he added, would benefit all Niger Delta people.

The NDDC Chief Executive Officer expressed delight that feasibility study for the project had been concluded, stating that the next stage would be to prepare the actual design and thereafter produce an agreement to spell out the conditions and terms of engagement.

Ekere urged the Chinese firm to work out the details to be presented at a subsequent meeting on February 6, 2018, showing the funding requirements since finance was always a challenge. a�?The meeting will also give us the opportunity to explain the interface with NDDC, especially at the technical level,a�? he said.

Presenting the scope of the power pool project, the NDDC Consultant and Managing Director of Income Electrik, Mr. Matthew Edevbie, said that the project would adopt a strategy a�?to harness the cheap, abundant, reliable and available power in the Niger Delta region.a�?

According to Edevbie, adequate power could be used as a catalyst to drive socio-economic growth and industrialization in the Niger Delta. He lamented that the region, with all its God-given natural resources, was yet to be industrialized.

He said: a�?It is good that the NDDC is looking at development in the region beyond oil and gas. What the project aims to achieve is to produce 7,000 MW of power across 18 power stations of the Niger Delta. It also aims at establishing industrial parks in each of the senatorial districts in the region. The power will be distributed to the industrial parks.a�?

The General Manager of SINOTEC Company Limited, Mr. Bu Songo, underscored the need for a Public, Private partnership for the development of a power plant in the Niger Delta, stressing that international funding was critical to the successful execution of such projects.

He said that SINOTEC, which had been engaged in different power generation and transmission projects in different parts of Africa, was well versed in contract financing.

Femi Fani Kayode reflects on The Happenings in Nigeria