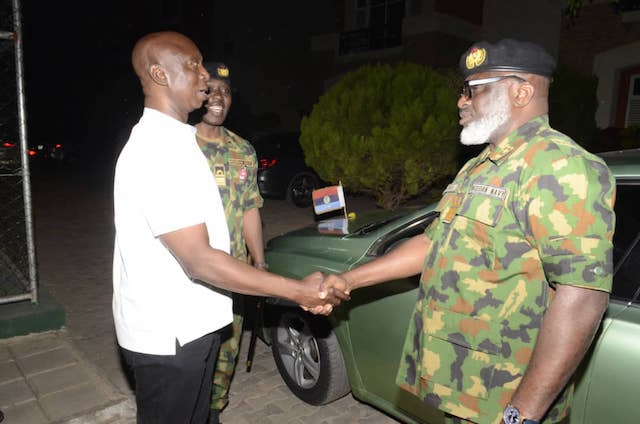 Hon. Prince Ned Nwoko has received top ranking officers of the Defence Headquarters ahead of extensive collaborations to foster the efficient implementation of the recently flagged off Malaria Eradication Project in Nigeria and also to envelop partnerships in anticipation of the forthcoming Unsung Heroes Concert, organized by the Nigeria Defence Headquarters.

During the visit which was led by Rear Admiral OH Ngalabak, the Chief of Defence Civil Military Corporation and Rear Admiral N.J Bala , they both confirmed that the challenges of malaria related illness for personnel’s was quite disturbing as they promised full support and commitments to the Malaria Eradication Project by Prince Ned Nwoko Foundation.

However the meeting also recorded deliberations on the forthcoming Tribute To Our Heroes(The Unsung Heroes Concert) to honour military personnel’s who sacrificed their lives to ensure that Nigeria is bigger and greater today. The event is holding on the 11th of January, at the National Stadium and will witness resounding performance from 30 Musicians, 10 Comedian’s, 4MCs and 3Disc Jockey.

Prince Ned was however elated and impressed by the actions and proactive steps taking by Nigeria Defence in addressing supportive partnership towards achieving fruition in the malaria eradication project for Africa. The high-leveled Nigeria Military delegation was received by Hon. Prince Ned Nwoko in the company of his wife’s mother Rita Daniels, Amb. John Fashanu and popular Billionaire crooner, lady Teni Makanaki.