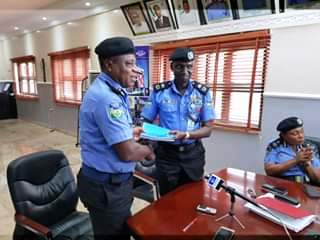 A new Commissioner of Police, Anthony Ogbizi Michael, has resumed duty at the Delta State Police Command while the former, Muhammad Mustafa, has been redeployed to Ebonyi State.

An alumnus of the University of Calabar where he obtained Bsc degree in Political Science, Anthony Ogbizi Michael, hails from Obudu local government area of Cross River State.

CP Anthony Ogbizi Michael, is happily married and has children.

While taking over from the outgoing CP, the incoming CP promised to build on existing security mechanisms on ground towards enthroning the reign of peace and security in Delta State. He advised members of the public to always cooperate with the Police and other security agencies at all times.

In the handing over remarks, the outgoing Commissioner of Police, Mustafa Muhammad, thanked the State Government and the people of the state for their cooperation with him and urged them to extend the same cooperation to his successor.

SERAP sues Buhari, NASS, others ‘over failure to account for security votes since 1999’