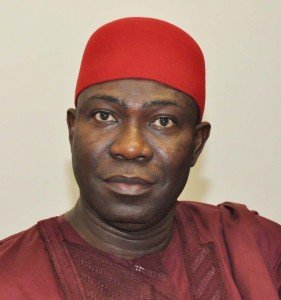 Deputy Senate President, Ike Ekweremadu,  said  that the Senate would pursue a speedy passage of the Constitution amendment document, which is now before the State Houses of Assembly.

In his New Year Message released by his Media Adviser, Uche Anichukwu, Ekweremadu implored  the State Assemblies to act in national interest while voting on the Constitution amendment document.

He said that the Senate would ensure better governance and greater future for Nigeria.

He said that the Constitution Alteration Bills currently before the State Houses of Assembly were very critical to the nation’s development and therefore urged the state legislators to uphold national interest and follow their conscience.

He said: “Currently before the State Assemblies are bills for compulsory saving of 10 percent of revenues paid into the Federation Account and which must not be tampered with for at least five years in order to build a saving culture for rainy days, reduction of the period within which a President or Governor may authorise the withdrawal of monies from the Consolidated Revenue Fund in the absence of an Appropriation Act or budget from six to three months, a uniform tenure of three years for Local Government Councils, financial autonomy for State Assemblies as well as abrogation of State Joint State Local Government Account and establishment of a Consolidated State Revenue Fund from which the Assemblies and Local Governments would directly access their funds.

“Others include a 30-day timeframe from the day of inauguration within which the President or Governor must submit the names of ministerial or commissioner-nominees to the National Assembly or State Assembly along with their proposed portfolios, independent candidacy, reduction of age qualification for the office of the President from 40 years to 35 years, reduction of the age qualification for the offices of House of Representatives and State Assembly from 35 to 25, and setting a timeframe for the determination of pre-election matters, among other critical electoral reforms.

“These and other proposed amendments, some of which also border on judicial reforms, already passed by the National Assembly, are critical to the future, good governance, and development of the country. Therefore, I can only enjoin our colleagues at the State

Assemblies to follow their conscience and act in national interest.”