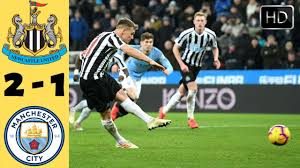 Manchester City’s grip on the Premier League title has loosened even more after a 2-1 loss at Newcastle United while Ole Gunnar Solskjaer’s record winning run as Manchester United manager ended at home against Burnley despite a late rally to snatch a 2-2 draw.

City had won their previous eight games in all competitions, scoring 33 goals in the process, and looked on course to close the gap on Liverpool to one point when Sergio Aguero put them in front after 24 seconds at St James’ Park.

But Pep Guardiola’s men were nowhere near their fluent best and Salomon Rondon equalised after 66 minutes before Matt Ritchie’s 80th-minute penalty secured victory for The Magpies.

Solskjaer received a reality check after his eight-game winning run as United’s interim manager was ended by Burnley in a 2-2 draw at Old Trafford.

It could have been worse for United’s top-four ambitions when they trailed 2-0 to goals by Ashley Barnes and New Zealander Chris Wood but Paul Pogba halved the deficit with a penalty in the 87th minute and Victor Lindelof struck to level in stoppage time.

The surprise setbacks for the Manchester clubs left City four points behind Liverpool who host Leicester City on Wednesday, and United in sixth place, two points behind Arsenal.

The Gunners beat Cardiff City 2-1 on an emotional night at the Emirates with second-half goals by Pierre-Emerick Aubameyang (penalty) and Alexandre Lacazette.

It was Cardiff’s first game since a light aircraft carrying their new signing Emiliano Sala went missing over the English Channel on January 21.

Flowers were laid on the pitch before kick-off in respect of the Argentine who might otherwise have been making his Bluebirds debut after joining from Nantes for a club-record fee.

The result left Cardiff third from bottom, two points ahead of Fulham who staged a remarkable comeback from two-goals down to beat Brighton & Hove Albion 4-2 at Craven Cottage.

Socceroos goalkeeper Mat Ryan was back in goal for Brighton after international duty at the Asian Cup and his side led courtesy of Glenn Murray’s first-half double.

However, Calum Chambers, Aleksandar Mitrovic, twice, and Luciano Vietto netted for the hosts in a remarkable second half.

Bottom side Huddersfield Town look down and out after a 1-0 home defeat by 10-man Everton in Jan Siewert’s first game in charge and Australia midfielder Aaron Mooy’s return, off the bench, from a knee injury.

Richarlison got the Toffees goal from close range after just three minutes to leave Huddersfield 11 points from safety.

In the battle for seventh place, Wolverhampton Wanderers beat West Ham United 3-0 at Molineux with a brace from Raul Jimenez after Romain Saiss’s headed opener.