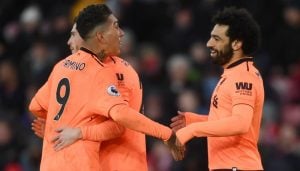 The Scotland winger tucked Dwight Gaylea��s lay-off into the bottom corner in the 65th minute of play on Tyneside.

The Red Devils missed a string of chances to take something from a ground at which manager Jose Mourinho is yet to win a league match.

a�?They fought like animals and animal is a good word in football and I hope they take it as a compliment,a�? Manchester United manager Jose Mourinho told Sky Sports of his opponents.

a�?They fought for their points and when they went in front they gave their lives to keep a clean sheet.

Meanwhile, goals from Roberto Firmino and Mohamed Salah fired Liverpool to a 2-0 victory at Southampton and up to third place.

Southampton, who were up against their former defender Virgil van Dijk on his return to St Marya��s, end the weekend in the relegation zone as their quest for a first home league win since November continues.

In the daya��s other match, Socceroos midfielder Aaron Mooy was stretchered off in the second half of Huddersfield Towna��s emphatic 4-1 Premier League win over Bournemouth.

Mooy had his head in his hands as he left the turf at the John Smitha��s Stadium and it was later confirmed he had suffered a deep cut requiring stitches but no ligament damage.

Steve Mounie scored twice as Huddersfield lifted themselves out of the relegation zone. Mooy played a role in both goals, delivering the free kick Mounie met with a downward header past Asmir Begovic and later offering the square ball the Beninese striker wrong-footed past the goalkeeper.

a�?It was a huge win for all of us,a�? Hudderfield manager Davod Wagner said. a�?We said before the game that this is massive for us and that after Old Trafford we had the difficult fixtures behind us.

a�?Now ita��s time to build up momentum against opponents which are in front of us, against whom we are more competitive.

a�?But ita��s one thing to speak about it and another thing a�� and this shows character a�� to do it and the players have done that.a�?