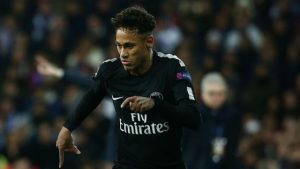 Neymar has admitted that his relationship with Paris Saint-Germain strike partner Edinson Cavani suffered from a�?a certain frictiona�? earlier in the season but he insisted the matter was overplayed.

After the Brazil international joined PSG in a record-breaking deal from Barcelona in the close-season, he soon found himself competing with Uruguayan team-mate Cavani for penalty-taking duties and the pair were involved in a heated argument on the pitch during a 2-0 victory over Lyon in September 2017.

The incident tainted the atmosphere around Unai Emerya��s team and rumours surfaced that Cavani could be sold as a result of reported tension between the pair.

In an interview with Brazilian TV network Globo, Neymar, who has since been strongly linked with a transfer to Real Madrid, cooled reports of unrest.

a�?It was made to sound bigger than it really was,a�? he said. a�?Of course, there was a certain tension, friction with Cavani, but we resolved it quickly.

a�?Three days after it happened, we all sat down and we talked. Wea��re two great players, but wea��re also people and we had to resolve the personal side of things.

a�?But the reports which came out were much bigger, I think because thata��s what sells. People oversell the stories, and talk about things they shouldna��t.a�?

The 26-year-old also spoke of his struggle to settle into life previous club Barca after he arrived from Santos in 2013.

Neymar said that guidance from the legendary Lionel Messi, who is four years his senior, helped him to overcome self-doubt in his first season at Camp Nou.

Describing a conversation between himself and the five-time Ballon da��Or winner during the half-time interval of a game in 2013, he said: a�?He saw that I was half crying because I had not had a good first half.

a�?Messi saw that I was sad and started talking to me: a�?You have to be you. Play your football and do not be intimidateda��.

a�?Like it or not, playing with so many stars takes you back. It gives you a bit of shame. After talking with him I started to let go, to show my football and to have confidence.

a�?It was when I relaxed, I found happiness and started a very big friendship.a�?

EXCLUSIVE: Osinbajo On Collision Course With Amaechi Over Onnoghen