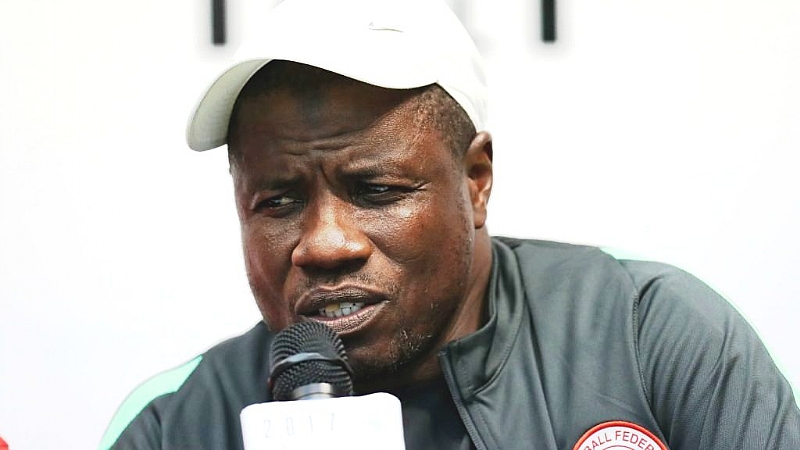 The Nigeria Football Federation (NFF)’s Committee on Ethics and Fair Play has placed a one –year ban from all football –related activities on Super Eagles’ Chief Coach, Mr. Salisu Yusuf.

This is sequel to its consideration of a complaint by the NFF as well as the Coach’s defence of a video documentary in which he was seen to accept the sum of $1,000 from an undercover reporter posing as a player’s agent.

The coach must also pay a fine in the sum of $5,000 to the Federation within three months.

In its report submitted to the NFF Secretariat on Tuesday, days after inviting the coach to state his own side of matters, the Committee, chaired by Mallam Nuhu Ribadu, said it:

“Established from the admission of Coach Salisu Yusuf and also found as a fact from the documentary and video evidence before it, that he accepted the cash gift of $1,000 offered by Tigers Player’s Agency, an undercover reporter, purportedly interested in acting on behalf of Players Osas Okoro and Rabiu Ali, for their inclusion in the list of players for 2018 CHAN Competition in Morocco.

“The Committee found as a fact that it was not an error of judgment on the part of Coach Salisu Yusuf but a conscious and deliberate decision to have accepted the cash gift of $1,000 from the decoy player agent/undercover reporter, purportedly interested in acting on behalf of Players Osas Okoro and Rabiu Ali, even though the evidence before the Committee did not establish that his conduct influenced the choice of the two players.

“That the two Players could have made the team to 2018 CHAN Competition in Morocco on the basis of their talent and performance.

“That Coach Salisu Yusuf did not accept the offer of 15% of the anticipated transfer fees of the said players, as there was no follow –up action on the promise.

“That the act of the Coach, which was widely published on the British Broadcasting Corporation, has a damaging effect on the reputation and integrity of Nigerian Football, as he ought to have conducted himself more professionally in line with the Code of Conduct signed alongside his Contract with the Nigeria Football Federation, as his conduct in public and in secret should be exemplary, since coaches are role models.

“That the FIFA Code of Ethics, NFF Code of Ethics and FIFA Disciplinary Code, did not contemplate negligence or error of judgment as a defence to violation of any of the provisions as contained therein, as punitive measures must be adopted to serve as deterrent to other intending offenders, even though, that he is a first time offender.”

The Committee therefore, resolved that: “In accordance with Art. 22, FIFA Disciplinary Code, he is hereby banned for the period of one year, from partaking or involvement or participation in any football related activity, effective from the date of this decision.

“He is also fined in the sum of $5,000 to be paid within three (3) months of the date of this decision…” The Committee also ruled that an appeal against the decision can be made to the NFF Appeals Committee.”

Flamingos Spank Guinea U17 girls 5-1, Romp Into Final Round

In signing Lucas Torreira, Arsenal has done something it hasn't done in over 15 Years