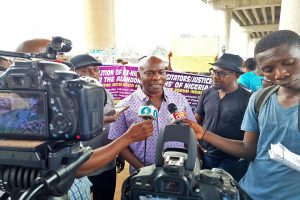 Niger Delta Amnesty Vendorsa�� Forum in collaboration with Coalition of Niger Delta Ex-agitators/Justice for the Abandoned Youths of Nigeria, today marched through major streets in Port Harcourt, Rivers State, calling on President Muhammadu Buhari to call the National Security Adviser, Gen. Mongonu to stop interfering with the day to day administration of the Presidential Amnesty Office in the interest of peace in the Niger Delta region.

Briefing newsmen at the end of the massive rally which started from the beginning of Ada-George road to terminate at Agip round about by Ikwerri road, President of the Niger Delta Amnesty Vendorsa�� Forum, Tari Okosi and Coordinator of the Coalition for Niger Delta Ex-agitators/Justice for the Abandoned Youths of Nigeria, Comrade Okpakariari Eferebo lamented how the National Security Adviser has shut down the Amnesty Office, warning that the interference of the NSA could trigger fresh simultaneous violent protests across the region.

They called on the President to use his good offices to intervene before the issue gets out of hands. Meanwhile, the groups have expressed fears that the National Security Adviser may be playing out a prepared script from politicians who are bent on derailing the President’s new vision for the Niger Delta region.

In a swift reaction to the unfolding developments at the Presidential Amnesty Office, Coordinator of the Patriotic Niger Deltans for Good Governance, Comrade Adonba Amgbare, pointed out that the ongoing undue interference from the National Security Adviser to the President has come to the people of the Niger Delta region not as a surprise, judging from the recent provocative statements from some persons in the north.

Tinubu gave me 'a beautiful piece of information I did not know about: Buhari

8 thoughts on “Niger Delta ex-agitators/ youths to Buhari: Call your NSA to order in the interest of peace”