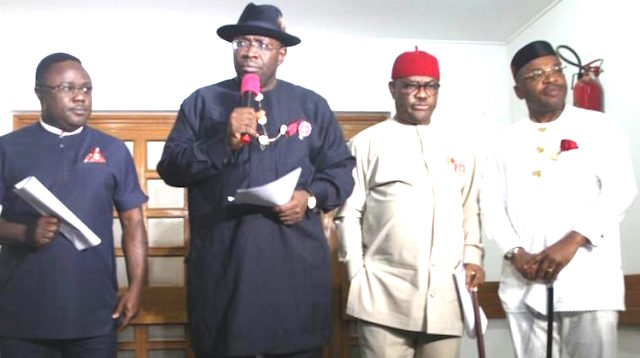 The Niger Delta governors have rejected President Muhammadu Buhari’s nominees into the board of the Niger Delta Development Commission, NDDC.

Rising from a meeting on Thursday, August 29, 2019, in Abuja, the governors expressed concerns over the way and manner the appointments were made, saying it does not reflect effecting governance mechanism.

According to Dickson, their concerns arose from protests being staged by people and stakeholders across the nine member states of the NDDC.

The governors, however, urged calm and restraint in the states, promising to ensure that the grievances of were addressed.

“We will meet with President Muhammadu Buhari to discuss the issues,” however, adding that the governors would not discuss the specifics until they meet with the President.

Other governors who attended the meeting were Rotimi Akeredolu (Ondo); Godwin Obaseki (Edo); Udom Emmanuel (Akwa Ibom); and representatives of two other states.

The forum, in a statement by its Coordinator, Kester Okele and Secretary Ebipade Timi, said the development was not in tandem with the NDDC Act.

Timi explained that Section 4 of the Act was clear on the rotation of the chairmanship position in alphabetical order.

“How come Edo is being gifted the chairmanship of the board after Cross River State took the last shot?’’ they asked.

The stakeholders queried Part IV, Section 12 (1), which states: “There shall be a managing director and two executive directors who shall be indigenes of oil producing areas, starting with the member-states of the commission with the highest production quantum of oil, and shall rotate among member states in order of production.”

They wondered why a state, such as Rivers, which is among the first three top oil producers hosting two refineries, and refines the highest amount of crude, was left out in the management committee of NDDC.

The All Progressives Congress, APC, in Ovia North East Local Government of Edo State has kicked against the nomination of Dr. Pius Odubu and Chief Victor Ekhator as board members.

APC, in an open letter to President Muhammadu Buhari, said while Ovia North East, as an oil producing council, has had nobody in the board since inception, Orhionmwon and Ikpoba-Okha councils had enjoyed this privilege.

It said the chairman of Edo State Oil and Gas Producing Areas Commission, EDSOGPADEC, Kennedy Osifo, was from Ikpoba-Okha.

The letter reads: “…with a careful analysis and assessment of all the issues…and if your opinion and position is not in doubt but in the affirmative, Ovia North East should be given the opportunity to serve on the board of NDDC.

“Orhionmwon representatives have served in NDDC for 18 years, while several representatives from Ikpoba-Okha have served for eight years. We pray Your Excellency to consider the principle of rotation and zoning as provided by the NDDC Act Section 2 (1) and reserve the NDDC chairman and commissioner positions to Ovia North East who have been denied any representation in the past 26 years.

“We pledge our loyalty and assure you that we will hold the office in trust for the people of Edo South.”

Also, some youths in the council marched on major streets of Benin, protesting the nominations.

They protested to the House of Assembly and the Government House.

“We demand equal representation in the NDDC. This is marginalisation of the highest order. We want relevant authorities to ensure that Ovia North East is not cheated,” Stephen said.

RESTRUCTURING MUST RETURN NIGERIA TO HER PRE -MILITARY STRUCTURE