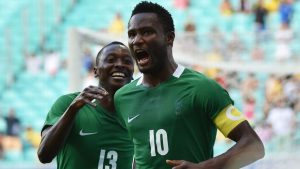 Nigeria captain John Obi Mikel is relishing a return to England for Junea��s high-profile international friendly against the Three Lions.

The fixture is one of several pre-World Cup warm-ups organised for the Super Eagles, and the West Africans have set themselves a stern test when they meet England, ranked 13th in the World Rankings, at Wembley on June 2.

a�?The match comes up only two weeks before our first match at the FIFA World Cup,a�?  the three-time FA Cup winner told the NFFa��s official website . a�?It will be a big occasion and a big match for both teams as we both look forward to our respective first matches in Russia.

a�?England is a special place for me having spent so many years playing there, and it is one country I love to go to,a�? he added.

Wea��re already talking to ourselves and everyone is looking forward to the game.a�?

Nigeria will begin their World Cup campaign against Croatia in Kaliningrad on June 16 before meeting Iceland in Volgograd six days later.

They conclude their group stage campaign against Argentina in Saint Petersburg on June 26.

The NFF have encouraged Nigerian supporters to buy a�?away ticketsa�� which range from A?35-70, with concessions available for students, senior citizens and under-16s.

The match will be the third meeting between the two nations following an England friendly victory in 1994 and a goalless stalemate at the 2002 World Cup.

108 thoughts on “Nigeria-England pre-World-Cup friendly excites Mikel Obi, says it will be big occasion for both teams”