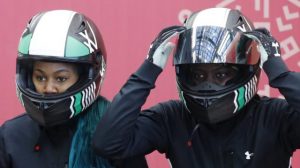 Bobsledders from Nigeria and Jamaica made history at the Winter Olympics in Pyeongchang, South Korea, on Tuesday.

In the two-women bobsleigh event, Nigeria’s Seun Adigun and Akuoma Omeoga became the first bobsled team to  represent an African nation . Alongside skeleton athlete Simidele Adeagbo , they are also  the first athletes from their country to compete in a winter olympiad.

Jamaica’s Jazmine Fenlator-Victorian and Carrie Russell, meanwhile, became the Caribbean island’s first Olympic female bobsledders a�� following a tricky week in which their coach, Sandra Kiriasis, resigned and put their competition into jeopardy after she  threatened to take the team’s bobsled .

They follow in the footsteps of Jamaica’s bobsled team at the 1988 Winter Olympics in Calgary, Canada. Their story inspired the movie a�? Cool Runnings .a�?