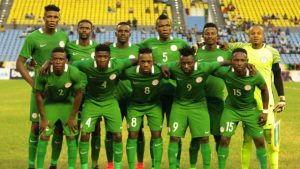 Nigeria’s Super Eagles on Wednesday beat Sudan 1-0 at Marrakech in Morocco to advance to their first-ever final match appearance at the African Nations Championship (CHAN).

The News Agency of Nigeria (NAN) reports that an early goal by Okechukwu Gabriel helped the home-based Eagles secure a spot in the final.

There, they will meet hosts Atlas Lions of Morocco on Sunday.

As early as the 12th minute, the Super Eagles were dealt a huge blow when goalkeeper Ikechukwu Ezenwa sustained an injury, forcing him to be replaced by Dele Ajiboye.

Three minutes later, Sudan had a glorious opportunity to grab the lead, but Ajiboye was quick to read the danger and put it under check.

However, it was Nigeria who found the back of the net a minute later when Gabriel beat Elhadi Akram from close range with a low shot.

In the 25th minute, Gabriel came close to bagging his brace when his left-footed shot sailed inches wide of Akram’s left corner.

In spite of good moves and dominance by the Falcons of Jediane in the dying stages of the half, it was 1-0 at halftime for Salisu Yusuf’s men.

Nigeria looked threatening in the second half, but they were soon slowed down when Ifeanyi Ifeanyi was sent off in the 58th minute after a dangerous tackle.

Coach Zdravko Logarusic’s men would take advantage of the situation to dictate the pace, and Osman Ismaeil saw his powerful shot going wide, with Ajiboye a spectator.

With three minutes to go, Sudan were also reduced to 10 men when Bakri Bachir received a red card for bringing down Solomon Ojo.

Ajiboye however kept the Nigerian team in the lead after producing two brilliant saves in the 90th minute to ensure they are through to the final.

The defeat for the Sudanese means they will meet the Mediterranean Knights of Libya in the third-place play-off on Saturday.(NAN)