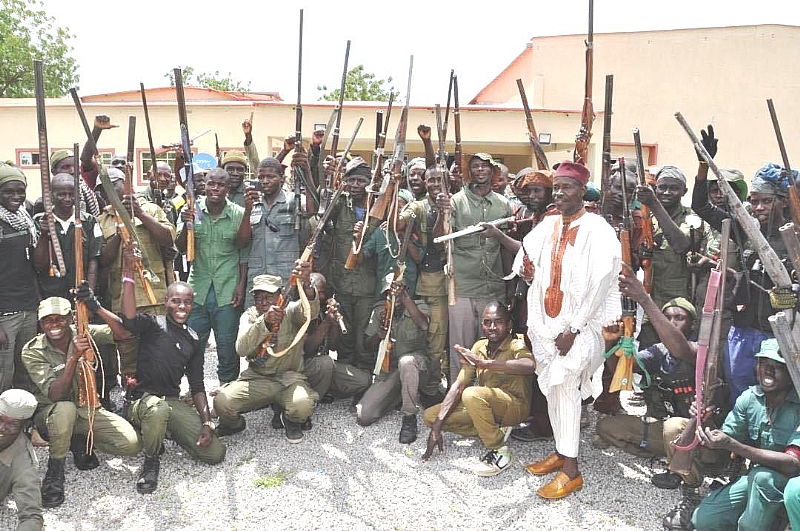 The Nigerian Army has assured the Vigilante/Hunters Association in Borno state of its readiness to collaborate with the Association in the ongoing counter insurgency operations in the North East.

The Acting General Officer Commanding (GOC), 7 Division Brigadier General Abdulmalik Biu gave the assurance in Maiduguri during a meeting with the members of the Association led by its Chairman, Alhaji Maigana Maidarma.

A statement issued by Colonel Kingsley Samuel, the Deputy Director, Army Public Relations, 7 Division, Nigerian Army Maiduguri Wednesday also stated that the meeting was timely and will afford them an opportunity to discuss possible ways towards ending insurgency in the region.

He commended them for their hunting prowess and familiarity of the terrain while urging them to proffer solutions that will help in effectively checkmating the menace of the Boko Haram terrorists.

The GOC further reassured them of adequate support from the commanders in the field to aid them in discharging their roles, adding that fighting insurgency needs a collective effort of every individual.

Gen Biu also charged them to provide credible and intelligence information that will assist in the apprehension of the terrorists while presenting some items to them in other to support them in their operation.

Earlier in his remarks, the Chairman Alhaji Maigana Maidarma, assured the Acting GOC of their support and promised to leverage on the Association’s knowledge of Sambisa Forest towards assisting the Army in their operations.

He enumerated some of the challenges confronting the Association to include lack of mobility and weapons to engage the insurgents.

Maigana also expressed delight at the efforts of the present leadership of the Nigerian Army as never witnessed before towards partnering with the Association and pledged their support to surmount the insurgency across the North East.

The Chairman was accompanied during the the visit by the former Chairman/ Women Leader Hajja Maira Mai-Durma, Secretary General of the Association, Bunu Bukar Mustapha among others.

Present during the visit were some Principal Staff Officers of the Division.